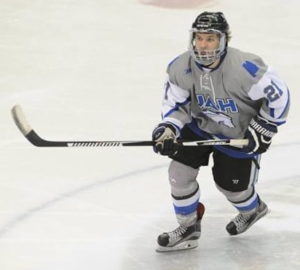 His name is Tyler Poulsen, and the recent WCHA Rookie of the Week and the Chargers host Minnesota State this weekend. (Photo by Doug Eagan/UAH Athletics)

It’s been rather quiet here recently, with the Chargers being off two of the last three weeks. Now it’s time for the final stretch in the regular season.

UAH is still on the outside looking in when it comes to the WCHA playoffs. The Chargers are in last place, still five points behind the teams they are chasing for a playoff berth, thanks to sweeps last weekend to said teams (Lake Superior State, Alaska Anchorage, Alaska).

With eight games to go, UAH is still alive, but it will likely need points every week and get more help to secure one of the league’s top eight spots. It will not be easy.

First is this weekend’s series against first-place Minnesota State at the Von Braun Center, the Chargers’ first home series in over a month. The 17th-ranked Mavericks split with Bowling Green in Mankato over the weekend to maintain a two-point lead over the Falcons and Michigan Tech.

Then the Chargers hit the road for series at Northern Michigan and Bemidji State, before coming home one final time against Bowling Green on March 4-5.

This week’s festivities: It’s Military Appreciation Weekend for this weekend’s series against Minnesota State. All veterans and active duty personnel, as well as their families, can get free admission to Friday and Saturday’s games. Puck drop is at 7 p.m. both nights.

UAH will have the seventh trading card set being given away on Friday to the first 500 fans, courtesy of Colonial Printing and the UAH Office of Research & Economic Development.

On Saturday, the first 1,000 fans get a free UAH hockey team photo, courtesy of SportsMed and the UAH Office of Research & Economic Development.

The Blue Line Club lunch will take place Friday at noon at the Varsity Room of Spragins Hall. Minnesota State coach Mike Hastings and the UAH coaching staff will be there to talk about this week’s series. New Orleans Lunch Box will be catering.

Poulsen gets league award: Tyler Poulsen was named WCHA Rookie of the Week on Feb. 1 after a two-point weekend at Alaska Anchorage. The freshman from Arvada, Colo., assisted on UAH’s first goal in the Chargers’ 2-1 win on Jan. 29, and scored his third goal of the season in the 4-3 loss on Jan. 30.