The Chargers are back at the Von Braun Center for the first time in over a month, hosting 17th-ranked Minnesota State for a WCHA series this Friday and Saturday. Puck drop is 7:07 p.m. both nights.

It’s Military Appreciation Weekend, as all veterans, active military personnel, and their families get free admission to both games. Kids 12 and under also get free general admission. 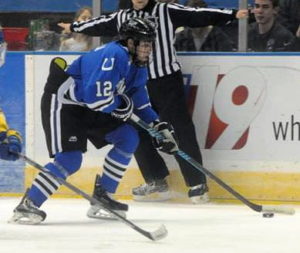 Charger recap: UAH (6-17-3 overall, 4-13-3 WCHA) was idle last week after splitting a series at Alaska Anchorage, winning and losing one-goal games despite not having Chad Brears and Brennan Saulnier, two of the Chargers’ leading scorers. The Chargers find themselves five points out of eighth place and playoff positioning in the WCHA.

On Friday, Jan. 29, the Chargers won 2-1 on a UAA own goal with 4:39 remaining in the game. Matt Salhany got credit for the game winner, and Adam Wilcox put UAH on top early. Matt Larose withstood a third-period barrage, making 13 saves in the period and a total of 29 in the game.

On Saturday, Jan. 30, UAH managed only 12 shots on goal, but was never out of it in a 4-3 loss to the Seawolves. Regan Soquila scored his first two goals of the season for the Chargers, with Tyler Poulsen also tallying a goal.

Max McHugh is currently tied for second in the WCHA in assists (15) and eighth in points (21).

Larose has posted a .944 save percentage since Dec. 18, the second-highest among WCHA goaltenders and seventh-highest in the nation. His season save perentage of .925 is fourth highest in the league.

About the Mavericks: Minnesota State (15-10-5 overall, 13-4-5 WCHA) is still on top of the WCHA standings. The Mavericks hold a two-point lead over Bowling Green, whom they split a big series with last weekend in Mankato, and Michigan Tech. MSU beat BGSU 5-1 on Friday before losing 3-1 on Saturday.

Senior Teddy Blueger, a Pittsburgh Penguins prospect, is the leading point scorer in the WCHA right now with 26 points, and his 18 assists is also tops. C.J. Franklin (Winnipeg) has 12 goals, tied for third in the league, and Bryce Gervais’s 10 goals are tied for ninth. Gervais scored twice in the Mavericks’ win over Bowling Green on Friday.

Casey Nelson’s 15 assists are tied for second in the WCHA, and his 19 points lead all defensemen.

Freshman Jason Pawloski has a 1.85 goals against average, good for second in the WCHA.