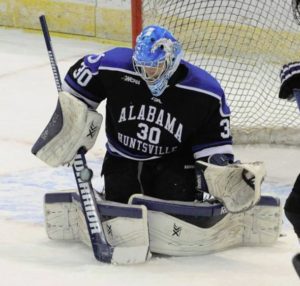 Matt Larose earned his first WCHA Defensive Player of the Week award for his play against Minnesota State. (Photo by UAH Athletics)

Sure, there were some crazy plays this weekend that drew a lot of attention and allowed the Chargers to steal a couple of points from first-place Minnesota State and keep their playoff hopes alive. But it was the play of junior goaltender Matt Larose that gave UAH any chance at all.

Larose was named the WCHA Defensive Player of the Week on Monday. Larose stopped 83 of 87 Minnesota State shots on goal, including a combined 13 in both overtimes, as UAH got two ties against the 17th-ranked Mavericks at home.

Ties ties: You might have heard that there have been a plethora of ties in the WCHA this season, to where some have wondered if the WCHA should change its overtime procedures to reduce their frequency or outright eliminate them. Ties haven’t been much of an issue for UAH until recently with the two ties against Minnesota State over the weekend and three in its last six games.

The two ties against the WCHA leaders and defending champions was unexpected enough, but getting two ties in a series has been very rare in UAH’s program history. The only other time it happened was Oct. 22-23, 1999, at home against Mercyhurst.

McHugh impact: He’s only a sophomore, but Max McHugh already has as many career points as any current Charger. McHugh has 44 career points, which is tied with senior Chad Brears.

The difference is McHugh has done it through 66 career games at UAH, while Brears has played 120. It not a bad rate of production.

Save the date: The Frenchy Open, the program’s biggest summer fund-raising golf tournament, is scheduled for Saturday, June 25, at 8 a.m. at Hampton Cove Golf Course. Registration details will come soon.

The alumni hockey game will be Friday, June 24, at 7 p.m. at the Huntsville Ice Plex.