Can the Chargers build on the two points they got against Minnesota State and continue a run toward the WCHA playoffs?

The Herd heads to Marquette, Michigan, this weekend to find out. UAH plays Northern Michigan on Friday and Saturday.

UAH is three points behind Alaska Anchorage for eighth place in the WCHA standings, the final conference playoff spot. Northern Michigan is in fifth place, in good shape to make the playoffs but looking to get into the top four and host a first-round series.

Matchup history: Northern Michigan leads the all-time series 9-2-3, including a 5-0-1 mark in Marquette. The two teams met in Huntsville back in December, with the Wildcats winning 4-3 before the teams battled to a 1-1 tie. 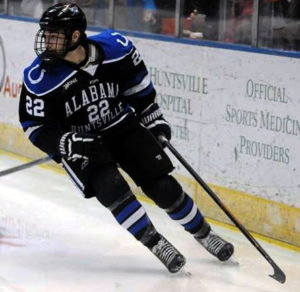 On Friday, Madison Dunn got his first two collegiate goals, one traditionally and one thanks to a Maverick own goal during a delayed penalty, in a 3-3 draw. UAH took the lead three times, with Minnesota State evening the game each time. Goaltender Matt Larose made 34 saves, and Brent Fletcher scored a short-handed goal.

On Saturday, the Mavericks continued to dominate the shots on goal department — getting 50 in all — but could only manage one goal in the second period. Matt Salhany scored on a breakaway shorthanded with 1:03 left in regulation to earn UAH a 1-1 tie. Larose made 49 saves, the most by a WCHA goaltender this season.

Larose earned WCHA Defensive Player of the Week honors. For the season, his .931 save percentage is third-best in the WCHA, and his 2.24 goals against average is seventh.

About the Wildcats: After hovering around .500 almost all season long, Northern Michigan (13-11-6 overall, 10-8-4 WCHA) has been playing well as of late, winning five of its last seven, looking to move into the top four to host a first-round series in the WCHA playoffs. The Wildcats sit in fifth place in the league, four points behind fourth-place Ferris State.

Last week, NMU went to Ferris State and earned a split, losing the first game 5-1 and rallied from a 2-0 deficit to win 3-2 in the second game.

Darren Nowick and Dominik Shine continue to pace the Wildcats, both being among the top four in the WCHA in points scored. Shine, who got a hat trick against the Chargers on Dec. 4, paces NMU with 12 goals. Nowick, along with sophomore Robbie Payne, has 11 goals.

Between the pipes, senior goaltender Mathias Dahlström is back after an injury sidelined him most of the season, including the series in Huntsville last December. In five games since returning Jan. 16, Dahlström has posted a .916 save percentage and 2.44 goals against average. Freshman Atte Tolvanen, who filled in for Dahlström has the No. 1 and started both games at UAH, has a .929 save percentage this season.