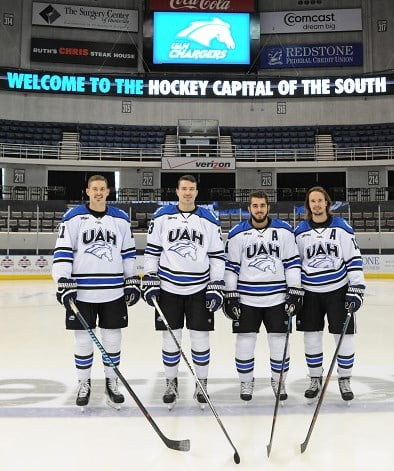 They committed to UAH when the hockey program was an independent with an uncertain future. This weekend, they will skate off the Von Braun Center ice one final time as Chargers, finishing their four-year odyssey.

Chad Brears, Frank Misuraca, Jack Prince, and Anderson White will be honored Saturday for Senior Night as the Chargers finish the 2015-16 season. UAH will host Bowling Green on Friday and Saturday, each game starting at 7:07 p.m.

Brears, an alternate captain from Cold Lake, Alberta, leads this year’s team with nine goals, and is tied for second with 17 points. In 124 career games at UAH, he has 19 goals and 25 assists for 44 points. A three-time WCHA Scholar-Athlete and two-time WCHA All-Academic, Brears was the WCHA’s Outstanding Student-Athlete of the Year for 2013-14.

Misuraca, another alternate captain from Clinton Township, Michigan, has a goal and four assists this season. The defenseman has 30 assists in 126 career games. Of his 11 UAH goals, the most memorable is his blast from the right point with four seconds left in overtime at Bowling Green in 2013, giving the Chargers their first WCHA victory. Two-time WCHA All-Academic Team.

Prince, a forward from Leicester, England, has played 102 games for the Chargers, scoring 13 goals and 22 assists. He lead the 2013-14 squad with eight goals and 13 points, and last year was on Great Britain’s national team at the World Championships in the Netherlands. Named to the WCHA All-Academic Team for 2014-15.

White, a defenseman from Caledon, Ontario, has played in 72 games for UAH, scoring four assists. White was named a WCHA Scholar Athlete three times and was named to the WCHA All-Academic Team twice.

This week’s festivities: The final home series of the season is presented by the U.S. Space and Rocket Center.

The Blue Line Club lunch will take place Friday at noon at the Varsity Room of Spragins Hall. Bowling Green coach Chris Bergeron and the UAH coaching staff will be there to talk about this week’s series. Lenny’s Subs will be catering.

Commit for ’17: The Chargers got a verbal commitment on Monday from Christian Rajic, a forward for the Oakville Blades of the Ontario Junior Hockey League.

The Oakville, Ontario native will play for UAH starting in the 2017-18 season. Rajic has 61 points in 42 games this season with the Blades, good for 12th in the OJHL.

For more information on future Chargers, visit the Commitments page.