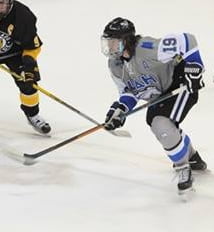 There are two ways to look at evaluating the Chargers’ season, which ended Saturday with a 7-21-6 overall record, a 5-17-6 WCHA record, and no WCHA playoff berth from a last-place finish.

One is the fact that we didn’t win as many games as last season, when UAH went 8-26-4 and made the WCHA playoffs as the 7th seed (finishing 8th in the standings). Going with that, it’s easy to assume that the Chargers regressed when many expected to continue an upward trend toward greater competitiveness.

The other is going deeper into the numbers to see where UAH specifically improved and specifically faltered. Basically, the team improved overall and in parts, but not as much as was hoped or expected.

Let’s start with the team record. UAH had one fewer win, but they had five fewer losses and two more ties. The Chargers’ overall win percentage (.294) is higher than last season’s (.263). And in WCHA play, UAH had one more conference point (16) than last season (15). It just so happened that 16 wasn’t enough to make the playoffs this time.

UAH’s offense grew by another half goal per game. Again, 2.15 goals per game isn’t much, ranking UAH only 9th in the WCHA, although the conference hardly has any offensive juggernauts (only Michigan Tech is averaging over three goals per game). The Chargers scored 73 goals this season, surpassing their 2014-15 total of 62 with four games to spare. They were shut out only three times this season (one coming against North Dakota’s Cam Johnson, who was shutting out everybody en route to that prestigious program’s scoreless streak record), compared to eight times last season and 12 times in 2013-14.

There is a caveat, however. A chunk of those 73 goals — 22 of them, in fact — came in the first six games of the season, where UAH started 3-2-1. Thirty percent of the goals came against Connecticut, Alaska Anchorage, and Lake Superior State. The Chargers then could not score more than three for 26 games, going 3-18-5 in that span, before exploding for seven in their win over Bowling Green on Friday.

Sophomore center Max McHugh led the team again in points with 22 on seven goals and 15 assists, compared to the 12 goals and 11 assists from last season. It was senior right wing Chad Brears who scored the most goals for UAH this season with nine, including a stretch of five in seven games from late November through December. Sophomore left wing Brennan Saulnier had six goals in five games to start the season, earning him WCHA Offensive Player of the Month honors for October, but could not find the net the rest of the way. Thirty percent of goals and 32 percent of points came from this line.

If there is to be further improvement in this area, it’s going to come from consistency and depth. 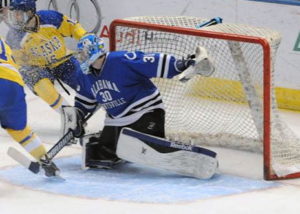 Very slight improvement here, and the average goals allowed would have been a little better if the Chargers hadn’t given up 16 goals in the final three games (it was down to 2.90 before that).

Last season, Carmine Guerriero became the Chargers’ No. 1 netminder. He didn’t have the strong season in 2015-16, and when Matt Larose posted UAH’s first shutout since 2010 at Lake Superior State, UAH returned to the rotation used in 2013-14. When Larose stopped 27 of 28 shots in a 3-1 rebound win against Alaska on Jan. 9, Larose became the primary netminder the rest of the season. Larose had the hot hand (glove) that Guerriero had last year, and went on to post the fourth-best single-season save percentage (.921) and goals against average (2.60) in UAH’s modern Division I era.

UAH reduced the number of shots on goal allowed per game from 37.58 last year to 33.18 this year, and it was the usual suspects, the top skill teams like Minnesota State and Michigan Tech, who would put the most rubber on net.

The Chargers also continued to block a lot of shots. Their 15.24 blocks per game is the most in the WCHA and 9th-highest in Division I, lead again by Brandon Carlson (65) and Frank Misuraca (63). Brandon Parker also made the top 50 among defensemen in the nation in blocked shots.

Here is where the Chargers regressed, returning to being one of the least inefficient power play units in the country (only Alaska Anchorage was worse in the WCHA). Only once (at Bowling Green on Nov. 20) did the Chargers score more than one power play goal. Not surprisingly, McHugh and Brears combined for five of the 15 PPGs from the top line. Freshman Jetlan Houcher got three of his four goals this season on the power play, and Josh Kestner and Madison Dunn each had two.

“Streaky” might be a good adjective for the penalty kill this season, and the rankings may look a little odd being near the bottom of the WCHA yet in the middle of the pack in Division I. It turned out to be an overall slight improvement, which was necessary as yet again the Chargers were in the top 10 in the country in penalty minutes per game at 15.3. (Perhaps not coincidentally, half the WCHA was in the top 10 in penalty minutes per game, all at fifth place or lower in the standings.)

But after that, from Thanksgiving to New Year’s, the Chargers killed 33 straight penalties, the team’s longest streak in 13 years. It included a 9-for-9 weekend at Minnesota State.