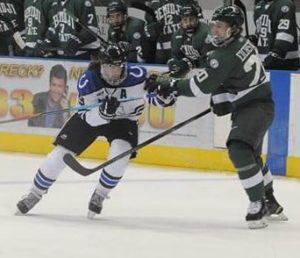 Chad Brears was this season’s Charger of the Year. (Photo by UAH Athletics/Doug Eagan)

On Thursday, the Chargers held their end-of-season banquet at Spragins Hall, honoring the 2015-16 squad and looking forward to next season.

The Chargers’ Most Valuable Player was Max McHugh. The sophomore led UAH in points for the second straight season, scoring 22 points on seven goals and 15 assists.

Senior Frank Misuraca was named the team’s Defensive Player of the Year for the second time. The alternate captain was second on the club with 63 blocked shots. He had an even plus-minus rating and scored one goal with four assists for five points.

The Freshman of the Year was Adam Wilcox. In 33 games played, Wilcox was tied for the team among freshmen with four goals, including one power play and one shorthanded tally. He finished with nine points on the season.

The Charger of the Year award, which goes to the player who exemplifies what it means to be a UAH Charger, went to Chad Brears. The senior and alternate captain from Cold Lake, Alberta led the Chargers in goals this season with nine, and was third on the team in assists (10) and second in points (19). He also led UAH in plus-minus (+6).

Sign up for the Frenchy Open: The 2016 UAH Hockey Frenchy Open will tee off at 8 a.m. on Saturday, June 25 at Hampton Cove Golf Course.

The golf tournament is the program’s biggest summer fundraising event. The tournament layout will be a four-player scramble with prizes going to the top three teams. Raffle and door prizes will be available.

Register online to reserve your spot. Registration per player is $150, which includes 18 holes of golf, a cart, a UAH Hockey shirt and hat, refreshments, and dinner. Full four-player teams can register for $600.

In addition, there will be an UAH alumni hockey game at the Wilcoxon Municipal Ice Complex in Huntsville on June 24 at 7 p.m.

“The Frenchy Open” is named after Charger left wing Jean-Marc Plante, who died in 2001. Also known as “Frenchy,” the Laval, Quebec, native played for UAH from 1988-92, scoring 16 goals and 19 assists in 94 games. Plante worked at the front office of the Florida Panthers and became the athletic marketing director at UAH. A memorial scholarship is awarded in his honor to the Charger hockey player who demonstrates leadership, sportsmanship, and team spirit, and who participates in community and university volunteer service.

Rappleyea commits: Sean Rappleyea of South Amboy, N.J. committed to the Chargers for the 2016-17 season last week. The defenseman was an alternate captain this past season for the Ottawa Jr. “A” Senators of the Central Canada Hockey League.

This past season, Rappleyea led the Senators in 35 assists in addition to three goals scored. The CCHL Defenseman of the Year was scored a goal and eight assists in 16 playoffs games as the Senators reached the CCHL championship series.