These are grim days for college hockey in Alaska, as UAA and UAF hockey look to be on the chopping block in a period that UAA athletic director Keith Hackett called “very, very trying times” on Thursday.  The University of Alaska system released a report on Thursday that seeks to confront the potential complete general fund cut in athletics across the system.  The report’s options aren’t crystal clear, but I’ll give the rundown as I best understand it: 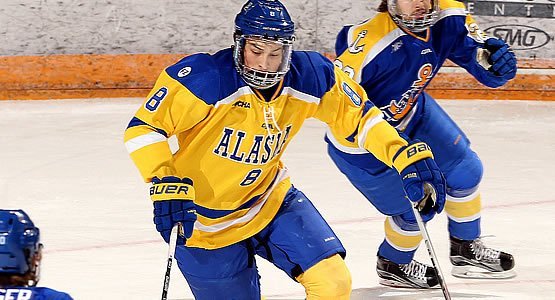 All is not bleak:

Hackett, though clearly frustrated by the impact budget cuts handed down by the Legislature will have on athletics, was quick to say that nothing in the report is finalized and actions by the Board of Regents aren’t limited to just those options.

“Everything is on the table, but there is no decision about programs at this time,” he said.

“There is a lot to think about here with the options presented, but I am particularly pleased that these groups have stepped up, stayed with the charge, and generated not only what I asked them to evaluate, but they have put forward some innovative ideas to realign university resources.”

Graeme Strukoff looks toward the net from the point with Doug Reid low in the slot. (Photo credit: Chris Brightwell)

If there’s a school that understands this situation, it’s UAH.  Alabama doesn’t have the same kind of fiscal problems that the State of Alaska does, but a $25MM cut was levied for the most recent budget by the Alaska state legislature and signed by the governor.  That decision is driving these cuts, which are not limited by any means to just athletics — academic programs are on the block as well.  All of this reminds me of a lot of the rumblings that I’ve heard from Tuscaloosa about how the programs shouldn’t try to compete and that UAH should keep athletics costs down.  I don’t think that this attitude has prevailed — UAH has added lacrosse, so cost containment overall wouldn’t appear to be an issue — but dividing and conquering has always seemed to be the way of the Alabama system.

It’s also very clear that state apportionments to education have steadily dropped over the last 20 years.  I remember when I was an undergraduate at UAH (I started 19 falls ago) that UAH’s general fund was sourced around 50% from money from Montgomery; for FY 2015, it was 21.3%.  (Note, that page is a rolling entry, so if you look at this in three years, the numbers will be different.)

It’s a difficult time for public higher education.  Our three schools have high travel costs due to being geographic outliers. We nearly lost our program; it would be a tragedy if UAA and/or UAF lost theirs.  With two of the three options ending hockey for at least one campus, this is pretty grim.  I don’t really see a reading of this where neither program is lost unless the general fun cuts come from other areas.  It feels very much like one program will go down, and I honestly expect both to be axed.

Public comment on Pathways has been sparse, especially in support of athletics.  Alaskans who love hockey, get out and make your voice heard — don’t confine your frustration to the USCHO Fan Forum.