Now to be clear, we want none of these things to happen, but it’s entirely possible that Minnesota State may leave the WCHA (a stronger bet now that Arizona State is angling for a slot in the NCHC) and that the Alaska schools don’t survive the chopping block.  What comes next?

At that point, the WCHA is a 7-team league: four teams in Michigan (Michigan Tech, Northern Michigan, Lake Superior, and Ferris State), and one each in Minnesota (Bemidji State), Ohio (Bowling Green), and Alabama.  That league looks something a bit like this, geographically: 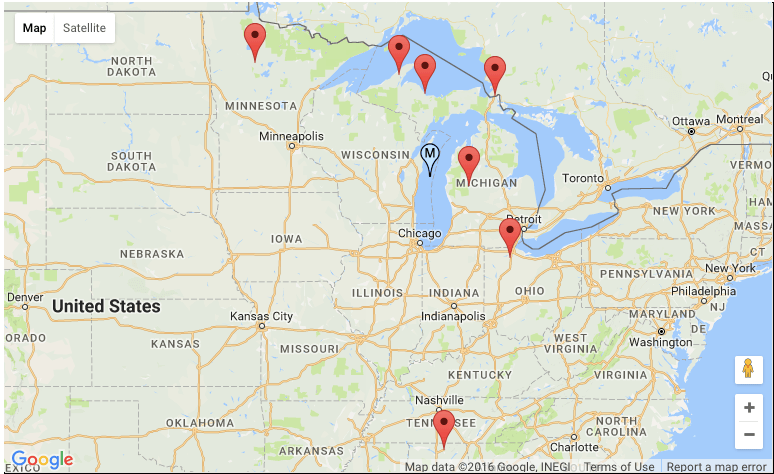 The only thing that league would have going for it would be a killer postseason tournament on a frozen Lake Michigan (or, failing that, one of those crazy Space-X rocket-landing barges flooded with an ice sheet).  A 7-team league would be a hard sell, because the only sensible scheduling mechanism, a 24-game league schedule where you play each team home-and-away, would be brutal on travel for six small schools and Bowling Green.  That’s a league that the Falcons would try to quickly exit if no new teams come in.  It’s also a modestly-upgraded College Hockey America.

But what if another shift in tectonic plates involves some Eastern teams on the western edge of things?  I’m specifically thinking of three schools who have had success in Atlantic Hockey, two of whom were previously in the CHA: Niagara, Robert Morris, and RIT.  Here’s what a geographic footprint with those teams looks like: 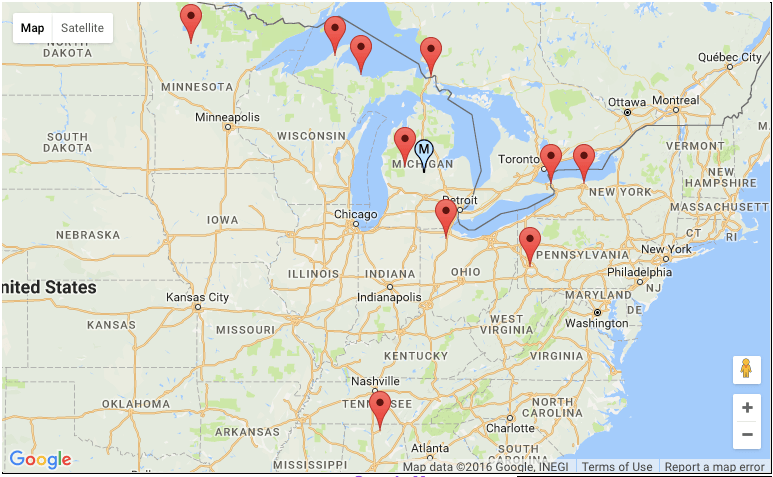 Now Niagara has been down on its luck the last three seasons, losing 20+ games in each of those campaigns.  RIT has faded a little bit, too, but they’re consistently a solid team.  Lastly, RMU has been scorching hot since the demise of the CHA, winning at least 17 games in every campaign.

Here’s how you make that setup work.  Remember that the WCHA has had a 28-game league schedule for 10 teams: one team you play as a travel pair, and the other eight alternate in a two- or four-game fashion.  Here are your sensible pairings:

Pairing UAH and Bemidji also puts teams into a situation where it’s rare that a team will have to make both trips in a season — just once in every four seasons.  Even better, you can do your two-game/four-game flip on the pairings: UAH plays Tech four times and Northern twice, then flips the next season, etc.  That lowers travel costs pretty significantly for everyone save Bemidji and UAH, who unfortunately (for them) don’t fit into any other league.

Let’s do a thought experiment with Bowling Green as the key.  Say it’s the Falcons’ year to travel to Pittsburgh, Huntsville, Tech, Niagara, Ferris, Rochester, and the Soo. 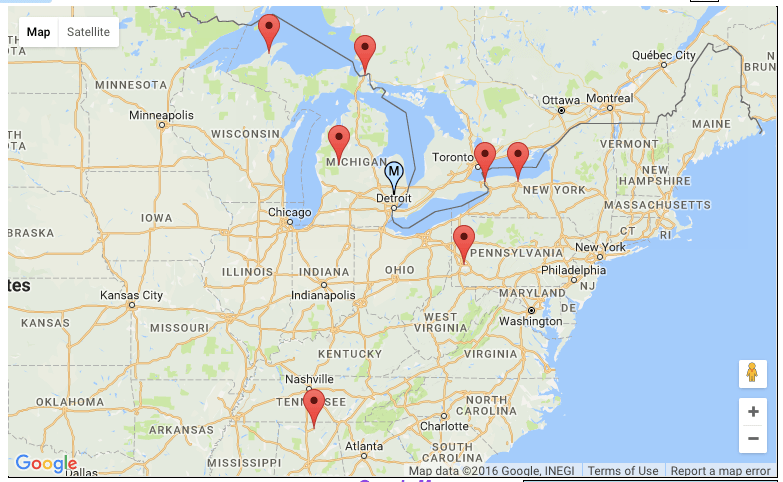 Losing Minnesota State, Alaska, and Alaska-Anchorage while adding Niagara, RIT, and Robert Morris moves the WCHA from WCHA Lite to CCHA Lite.  Better still, Bowling Green owns the rights to the name of the CCHA.  If we’re going to lose Mankato, I propose that we sell the NCHC the name WCHA and revive the CCHA name.  Half of the league’s teams have a CCHA pedigree (counting Tech’s brief presence in the league), and the CCHA is strongly associated with Michigan and Ohio, if not these schools.  Playing closer to the middle of the country may allow the W(C)CHA to get non-conference games with the schools in that area.  (Emphasis on may.)

If the WCHA loses the Alaska schools, they are on the knife edge of being able to schedule a far-flung league, even one without the long trips to the 49th.  Playing a 28-game league schedule with eight teams means that everyone travels everywhere else in a season.  The Michigan and Ohio teams have to be unenthusiastic about that.  Yes, you travel to Huntsville three years in four, but that’s better than going to Alaska three years in four and twice once every four.

If you’re interested, I’ve developed the CCHA Lite Schedule Format (PDF) of my thinking for this.  I used the template of the home / away / home & home setup of the current WCHA, substituting UAH and BSU for UAA and UAF (figuring that the schedule had worked out for the long travel), RMU for UAH (making the shorter trip for the Falcons), and NU and RIT for BSU and MSU (keeping an in-state pair of schools a bit removed from the rest of the league paired together).  I think that this works pretty well, at least for a start.

There are two pretty big IFs here, but they’re realistic, and if they come to fruition, the WCHA needs to be ready.