The NCHC said no today to expansion bids from Arizona and Minnesota State.

The word on the street is that the Alaska situation is a concern, although not a primary one.

This obviates the recovery for a 7-team WCHA that I proposed the other day, but an 8-team WCHA would have some travel issues as well.  The question is going to be very simple: if the Alaska schools drop Division I athletics at both campuses, will the WCHA be comfortable with an 8-team scheduling matrix?

Eight teams drives you to play your seven opponents home-and-away: Huntsville every year, Bemidji every year, everyone every year.  Do you add two teams to ameliorate that travel?  You’d consider it, but who could come aboard?  The exit fee to leave the NCHC is $1.5MM per Brad E. Schlossman, and that means that you’re not going to see Western Michigan and Miami come back to a league that would look increasingly like the old CCHA.  [Also not happening: WMU and MU for BSU and MSU.  This isn’t a Yahoo! college hockey fantasy league.]

What about Arizona State?

Good question!  I know that the WCHA really wanted to get a name school into the league, and even with an uncertain arena situation (see the first link up top from CHN), it may be a good fit for the league.  I noted earlier today that the WCHA may want to get them and make it hard for them to leave.  While it may look bad to add a geographical outlier like the Sun Devils, the matter of fact is that a 9-team WCHA that loses the Alaska schools but adds Arizona State can easily put in a system where you generally don’t play in Tempe and Huntsville every year, the biggest flight for most schools.

Would the WCHA want to add Arizona State and another team to go stay at 10 teams?

That’s a big maybe.  Robert Morris is probably the most sensible option, as you can make UAH-ASU a scheduling pair and make BGSU-RMU a travel pair.  From Sunday:

BGSU-RMU: The two schools aren’t terribly far apart, and Ohioans largely hate Pittsburgh.  Also, losing the pairing with UAH keeps their travel costs down.  Keeping BGSU is key for the health of the league — probably moreso than any other team.

The resulting geographic pattern isn’t a terrible one: 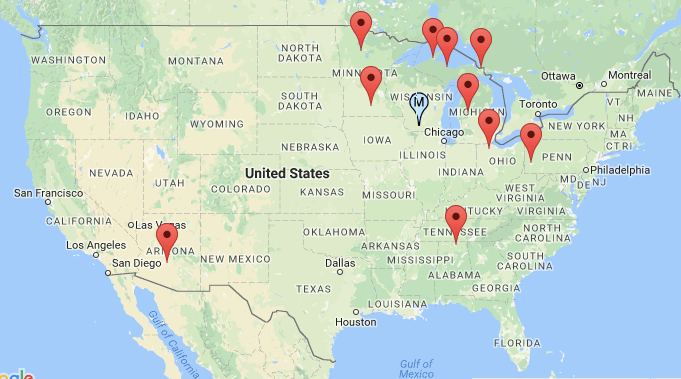 What if the Alaska schools survive?  Will Arizona State get in anyway?

I’m going to bet yes, and I think that they’d look at add a 12th (e.g., RMU) to keep a core in the arc of the Midwest in order to keep travel costs down for schools that aren’t far-flung.

There’s a lotta ins, a lotta outs, a lotta what-have-yous.  I did a lot of work on this the other night, and I’m sure that I’ll do more. But I’ll probably be pulling it off this site and onto another one.