Using the experience gained from three tough years in the WCHA, the Chargers head into their fourth league campaign looking to climb the standings and back into the playoffs.

The season starts Saturday in Big Rapids, Michigan, as UAH faces a Ferris State club looking to build upon its WCHA tournament championship and NCAA tournament appearance last season and challenge the upper echelon for the MacNaughton Cup. Puck drop is at 4:07 p.m. Central on Saturday and 2:07 p.m. Sunday and can be seen on WCHA.tv.

It is UAH’s 32nd varsity season and 38th overall.

All-time series: Ferris State leads 13-3-1, including an 8-1-1 advantage in Big Rapids. Last season, the teams met twice in Big Rapids, with a 3-3 tie (FSU getting an extra-attacker tying goal with 1:03 left in regulation) and a 4-1 Ferris State win. The clubs face off in Huntsville on Dec. 3 and 4. 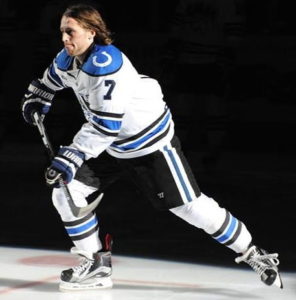 Charger recap: UAH finished last season with an 7-21-6 record overall and a 5-17-6 record in the WCHA. The Chargers finished in 10th place and missed the playoffs. They are expected to finish ninth according to the WCHA coaches’ and media preseason polls.

UAH bumped its scoring output to 2.15 goals per game last season, but the Chargers will need more to get back into the postseason. They’ll rely on a set of core veterans led by junior Max McHugh, who was UAH’s leading scorer in each of his first two seasons. In 2015-16, McHugh had 22 points on seven goals and 15 assists.

Senior Matt Larose will be the likely starter in net. He had a .921 save percentage and 2.61 goals against average in 16 starts last season. Senior Carmine Guerriero will sit out the first 12 games of the season by NCAA rules, because he played junior games past his 21st birthday. Junior Jordan Uhelski will be the backup.

About the Bulldogs: Ferris State finished the 2015-16 season with a 20-15-6 overall record and a 13-11-4 WCHA record. The Bulldogs finished fourth in the league in the regular-season race, but defeated both co-MacNaughton Cup champions, Michigan Tech and Minnesota State, at the Final Five to win the conference tournament and a spot in the NCAA tournament. At the West Regional, they took out St. Cloud State before losing to Denver in the final.

The Bulldogs were picked to finish fourth again in the WCHA in both the coaches and media preseason polls. Ferris State is ranked 20th in the USCHO.com preseason poll.

Senior Gerald Mayhew, who scored 16 goals and 41 points last season to earn All-WCHA second team honors, was picked by the coaches and media to win the Preseason Player of the Year. Sophomore Corey Mackin scored 10 goals and 25 points to win the league’s Rookie of the Year crown. Chad MacDonald also returns as a senior after scoring 10 goals last season.

Sophomore goaltender Darren Smith played 33 games for the Bulldogs in his freshman season, posting a .919 save percentage and 2.33 goals against average.

Around the WCHA: UAH-Ferris State is the first conference series of the season. Michigan Tech is at Minnesota Duluth for a big non-conference series, while some other league teams are playing preseason exhibitions.