The Chargers try to end a winless streak this weekend with a tough trip to 10th-ranked St. Cloud State.

All-time series: St. Cloud State has won all 11 meetings against UAH, including all six in St. Cloud. The teams met last in Nov. 2013 at the VBC, where Huntsville native Nic Dowd and the Huskies won 10-0 and 4-3.

On Friday, the Lakers scored four times in a 7:27 stretch of the second period en route to a 6-3 win. Josh Kestner, Jordan Larson, and Brandon Salerno scored for UAH. 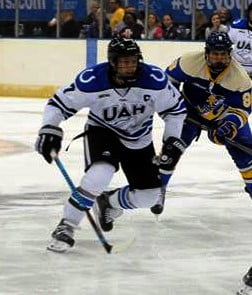 On Saturday, Lake Superior again pulled away in the second period to win 5-2. Max McHugh scored both goals for the Chargers.

The Chargers have been struggling defensively in the slide, allowing 29 goals in the last six games. Opponents have gone 9-for-29 (31 percent) on the power play.

Last weekend, the Huskies took both games from a home-and-home series with then-7th ranked Minnesota, winning 6-5 in overtime in Minneapolis and 3-2 at home. Two weeks ago, SCSU was swept at Minnesota State to start the season.

Judd Peterson, a 2012 draft pick of the Buffalo Sabres, leads the Huskies with four goals in four games. He had 16 goals to lead all returning players from last season’s SCSU squad, which won 31 games and made the NCAA Tournament. Mikey Eyssimont, a sophomore Los Angeles Kings prospect, scored 14 goals last season and has two this season.

The Huskies feature two freshmen goaltenders. Jeff Smith and Zach Driscoll each have two starts, combining for a 4.20 goals against average and .861 save percentage.

St. Cloud State was picked to finish fourth in the NCHC preseason poll.

Around the WCHA: All times Central. Games featuring WCHA teams at home can be seen on WCHA.tv. (* – WCHA game)