The Chargers need to put a rough October behind them. Perhaps the long trip to Alaska will help as they visit a struggling Seawolves club this weekend in Anchorage.

Charger recap: UAH (2-7-1 overall, 2-3-1 WCHA) is winless in its last eight games. Last week, the Chargers were swept 5-1 and 5-2 at 10th-ranked St. Cloud State in a non-conference series. UAH currently sits in fifth place in the WCHA standings. 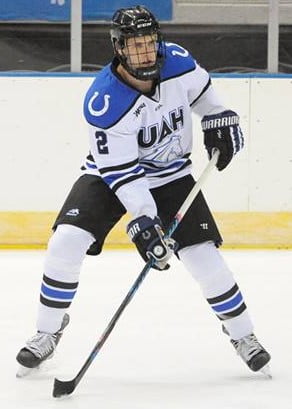 Defense has been a sore spot for the Chargers, who are last in the WCHA and 54th in Division I at 4.30 goals allowed per game. What has been working for them is blocking shots: UAH is sixth in the nation blocking 15.6 shots per game. Cam Knight leads the nation with 25, with Brandon Carlson and Brandon Parker tied for second with 23.

Jordan Uhelski has become the No. 1 goaltender, taking over for struggling senior Matt Larose. Uhelski started both games of a series for the first time last week at St. Cloud, making 48 saves on Friday.

UAH has scored only 1.80 goals per game. Max McHugh continues to grow into a consistent threat — his five goals is tied with Northern Michigan’s Robbie Payne for the WCHA lead. His right-wing linemate Josh Kestner has seven points (three goals, four assists). Jordan Larson (2-3-5) has had a solid start in his freshman season.

After this series in Anchorage, in what’s sure to be a welcome respite, the Chargers stay in Huntsville for a month with a six-game homestand, starting with a series with the Alaska Nanooks on Nov. 11-12.

About the Seawolves: Alaska Anchorage (1-5-0 overall, 0-2-0 WCHA) was swept in its opening WCHA series last week at Bemidji State, losing 2-1 in overtime and 4-0.

UAA has struggled more on offense than the Chargers, scoring only four goals in six games and going 1-for-30 on the power play. Junior forward Tad Kozun, who led the Seawolves with 13 goals last season, has no points so far.

Junior goaltender Olivier Mantha has a 3.18 goals against average and .898 save percentage in five starts this season.

The Seawolves were picked to finish 8th in the WCHA preseason coaches’ poll and 10th in the preseason media poll.

Around the WCHA: Bemidji State and Northern Michigan square of in the other league series. Minnesota State hosts St. Cloud State in a battle of ranked teams.