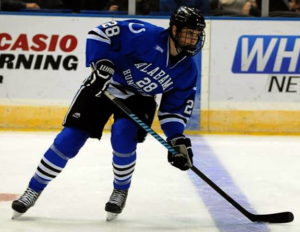 The Chargers’ Kurt Gosselin was named the WCHA’s Defensive Player of the Week on Monday for his performances in UAH’s series sweep at Alaska Anchorage.

The sophomore from Brighton, Michigan scored the Chargers’ final goal in their 5-2 victory on Friday, and the second goal in their 3-2 overtime win on Saturday. Gosselin served the primary assist on Matt Salhany’s winning goal in overtime.

Defensively, Gosselin was +2 for the weekend.

All current and former servicemen and women can get free general admission to both games. Puck drop is 7:07 p.m. both Friday and Saturday nights.

Other promotions this weekend include the first 500 fans getting a free set of UAH hockey trading cards, sponsored by Wells Fargo. Kids 12 and under get free general admission all season courtesy of Huntsville International Airport.

Home for a while: After playing five of their first six series on the road, the Chargers look forward to avoiding bus and plane rides for a month.

This weekend’s series against Alaska is the first of three home series over the next four weeks, and UAH will be off during Thanksgiving weekend.

The Chargers host WCHA preseason favorite Bowling Green on Nov. 18-19, followed by Ferris State, whom the Chargers swept in Michigan to start the season, on Dec. 3-4.

UAH now has more home games left in the season (12) than away/neutral contests (10).

This week’s guest is Alaska head coach Dallas Ferguson. He and UAH coach Mike Corbett will discuss this weekend’s series.

Lawlers Barbecue will be catering.

Best result in Alaska: UAH earned its first-ever on-ice sweep not only in Anchorage, but in all the state of Alaska.

The Chargers have never swept a series in Fairbanks as it happened. Technically UAH swept UAF in Fairbanks in 1991, but UAF actually won one of those games and later forfeited it for using an ineligible player.

UAH is now 3-11-0 all time in Anchorage, with all three wins over the Seawolves coming in the last two seasons.

The Chargers make their second trip to Alaska this season on Feb. 3-4, when they go to Fairbanks to face the Nanooks.