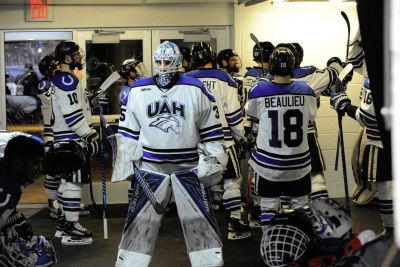 Carmine Guerriero and the Chargers, who had a bye week during the Thanksgiving holiday, look to lock down some Ws starting this weekend against Ferris State. (Photo by UAH Athletics)

That’s what UAH coach Mike Corbett told Penalty Box Radio after the Chargers’ last game, a 8-3 letdown against Bowling Green at the Von Braun Center on Nov. 19. Even though UAH had played the last two series at home, playing the first eight weeks straight, with five of the first six on the road, apparently had taken a toll.

Believe it or not, UAH is one game shy of being halfway through its regular season already, having played 16 of 34 games. The first half has been a head scratcher to say the least.

It’s mostly been disappointing, especially after the Chargers started well with a sweep at Ferris State to start the season. The two other wins since have come at Alaska Anchorage, which has won only one game (against Canisius).

The upside is that those four wins have come on the road; UAH is 4-1-1 in WCHA road games. The tie came at Michigan Tech, where the Chargers finally got a point — any point — since joining the league.

However, the Chargers’ home woes have been frustrating. UAH is 0-5-1 at Propst Arena, with the Chargers holding leads in five of those six games.

Finishing has generally been a problem as of late. The Chargers have had a lead in their last seven games, yet they are 2-4-1 in that stretch — the aforementioned sweep at Anchorage being the wins. The tie was a 3-3 result against Alaska, which rallied from 3-0 down and scored in the 3-on-3 second overtime to steal two points from UAH.

The losses have been close until late, with the opponents scoring an empty-net goal to seal the deal (or, in the case of the 8-3 debacle against Bowling Green, an empty-netter plus two garbage goals).

“We’ve got to learn to win those games,” Corbett said. “When something bad happens, we’ve got to learn to fight back. … We’ve been able to score first goals and get leads at certain times, and then when adversity hits, we don’t deal with it very well.”

That the difference, it seems, from past years: Many of these losses could have been wins, despite still not scoring at a great clip (2.12 per game, about the same as last season).

The defense, however, has not been good. UAH is last in the WCHA and 56th in Divsion I giving up 4.06 goals per game. The Chargers are blocking tons of shots, second in the WCHA at 14.44 per game, but that hasn’t been enough.

Still, the Chargers are tied for 5th place in the WCHA standings, so they are very much in the hunt for a return to the WCHA playoffs. After a week off to reset the season — which continues this weekend at home against Ferris State — may be what they need to, as has been the mantra all season, turn the corner.

In the pros: Brandon Carlson, who played his last game for the Chargers on Nov. 19 as he finished his NCAA eligibility, didn’t take long to play his first pro game.

Carlson joined the Indy Fuel of the ECHL on Nov. 23, and the defenseman is +3 in two games played so far.

Talbot update: UAH alum Cam Talbot has had a fine season so far in his second year with the Edmonton Oilers, sporting a .921 save percentage and 2.45 goals against average with three shutouts. Talbot has been a big reason why the Oilers are in first place in the Pacific Division.

Promotions: The first 500 fans at Saturday’s game against Ferris State will receive a free UAH hockey Christmas card. Puck drop is at 7 p.m.

Sunday’s game starts at 3 p.m., with the first 500 fans getting the next set of UAH hockey trading cards.

There will be no Blue Line Club luncheon this week.