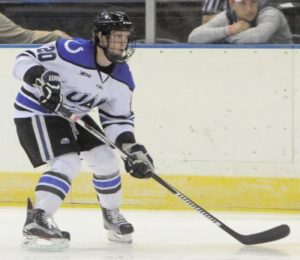 After scoring two goals to lead the Chargers of a road sweep at Northern Michigan, Brandon Parker was named the WCHA Defensive Player of the Week on Monday.

On Friday, Parker scored from just inside the blue line in what would be the game-winning goal in UAH’s 4-1 victory. On Saturday, he put the finishing touches on a 3-1 win with the final goal with 4:07 left in the contest.

Parker added an assist on Friday for a three-point weekend. He has scored goals in three straight games and in four of the last five. The Faribault, Minnesota native was +3 on the weekend and blocked two shots.

It is the fourth time this season a Charger has earned the WCHA Defensive Player Award. Kurt Gosselin won it last week for the second time, and Matt Larose won the first award of the season.

UAH next plays in the first round of the Mariucci Classic at Minnesota against Massachusetts on Dec. 30. The Chargers return home Jan. 6-7 against Minnesota State.