The Chargers, tied for fourth in the WCHA standings, hosts the team they are tied with, No. 19 Minnesota State, to kick off the run to the WCHA playoffs.

All-time series: Minnesota State leads the all-time series 27-19-7. UAH is 13-10-3 against the Mavericks in Huntsville — including a pair of ties at the VBC last season. However, UAH has not beaten MSU in the last 20 meetings going back to 2002.

Charger recap: UAH (7-13-2 overall, 7-7-2 WCHA) lost two games in overtime at the Mariucci Classic in Minnesota last week. The Chargers lost 2-1 against Massachusetts, and gave up a two-goal, third-period lead in a 3-2 lost to Mercyhurst. 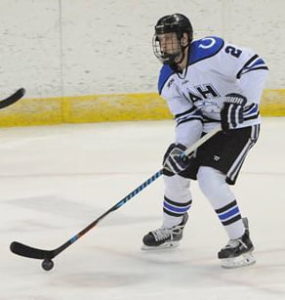 UAH outshot its opponents 73-44 in the tournament. Jordan Uhelski made 17 saves against UMass, and Carmine Guerriero had 22 against Mercyhurst. Uhelski now sports a .907 save percentage and 2.67 goals against average.

Max McHugh scored the goal against UMass, his seventh of the season tying him for the team lead with defenseman Kurt Gosselin. McHugh now has 15 points on the season.

Josh Kestner leads the Chargers with 17 points, adding his 11th assist against Massachusetts. He is tied for 6th in the WCHA in total points.

About the Mavericks: Minnesota State (11-7-2 overall, 7-5-2 WCHA) has not played since Dec. 16-17, when the Mavericks split a non-conference road series at Princeton. After starting 5-0, the Mavericks have not put together back-to-back wins. They are ranked 19th in the latest USCHO.com poll.

Freshman sensation Marc Michaelis of Mannheim, Germany is the WCHA’s overall scoring leader with 26 points on 10 goals and 16 assists. He has 12 points in his last six games, which earned him WCHA and national rookie of the month honors.

Michaelis is the left wing on the Mavericks’ top line with juniors Brad McClure and C.J. Franklin (Winnipeg Jets prospect), who have 18 points (8 goals, 10 assists) and 17 points (7 goals, 10 assists), respectively.

Goaltending has been split by senior Cole Huggins (.899 save percentage, 2.41 goals against average) and sophomore Jason Pawloski (.909, 2.49). Huggins, who has two WCHA goaltending titles, has started four of the last five games for the Mavs.