The Chargers try to get back into the win column where they’ve managed to be the most successful — league play on the road. UAH is 6-1-1 in WCHA away contests entering this weekend’s series at Lake Superior State in Sault Ste. Marie, Michigan. 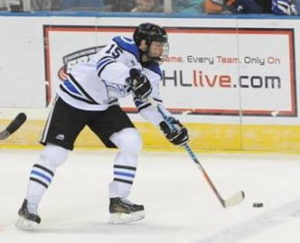 UAH was outshot 33-18 in the first game and was shut out for the third time this season. The Chargers mounted a two-goal rally — and actually managed to outshoot the Mavericks (31-25) for te first time since joining the WCHA — from another 3-0 deficit in the third period of the second game, with Max McHugh and Hans Gorowsky getting the goals.

McHugh’s goal was his eighth of the season, giving him the team lead. He has a goal in each of the last three series. Gorowsky has two goals and four assists in his last eight games.

Josh Kestner still leads the club with 17 points (6 g, 11 a), but has been held scoreless in his last three games. Defenseman Kurt Gosselin has scored seven goals and 13 points but has been kept off the scoresheet for the last seven games since scoring UAH’s first hat trick since 2008 against Ferris State on Dec. 4.

Jordan Uhelski improved to a 2.63 goals against average and a .909 save percentage following a 30-save performance on Jan. 6. Carmine Guerriero stopped 22 shots against the Maverics on Jan. 7

About the Lakers: Lake Superior State (9-12-3 overall, 6-9-3 WCHA) had a couple of ties last week in a home-and-home series with Northern Michigan (splitting six points). The Lakers are 3-11-3 after a 6-1-0 start, and have dropped to eighth in the WCHA standings.

The Lakers are led by junior JT Henke, who leads the squad with 23 points (7 goals, 16 assists) — nine in the last six games. Sophomore Mitch Hults is right behind him with 22 points (6-16).

Diego Cuglietta, who had three goals in the series against UAH in Huntsville, has 10 goals on the season. But the hottest Laker is freshman Max Humitz, who has scored five goals in the last five games, rocketing him to the team lead and tie for the WCHA lead with 11.

Star goaltender Gordon Defiel has a 2.52 goals against average and a .915 save percentage. He stopped 60 of 62 shots against Northern Michigan last week.

On Thursday, Laker sophomore defenseman Owen Headrick left the team to join the Erie Otters of the OHL. Headrick had 15 points, tied for fourth on the team, in 24 games this season.