The Chargers look to improve their playoff position all the way in Fairbanks, Alaska, where they’ll face Alaska. Puck drop against the Nanooks is at 10:07 p.m. Central (7:07 Alaska) Friday and Saturday nights.

UAH is in eighth place in the WCHA standings, the last playoff spot. Alaska is in seventh, just three points ahead of the Chargers.

The teams met in Huntsville back in November. In the first game, UAH scored twice in the first 2:24 and mounted a 3-0 lead, but Alaska rallied for a 3-3 tie and the second WCHA point in the 3-on-3 overtime. The Nanooks won the second game 3-1 to take five of six points in the series. 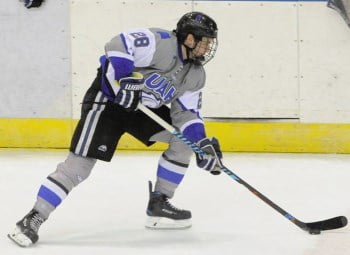 Charger recap: UAH (7-18-3 overall, 7-12-3 WCHA) finally ended its losing streak at seven games with a 4-4 tie Saturday against Michigan Tech, which took the second WCHA point in a 9-round shootout. But the Chargers still haven’t won since Dec. 10. Tech won the first game of the series 5-2 last Friday.

Sophomore defenseman Kurt Gosselin took the team lead in goals on Saturday with his ninth of the season, and he added two assists to give him 18 points on the season. He only trails Josh Kestner, who has 21 points after notching his 13th assist last Friday. Kestner is 10th in the WCHA in points and assists.

Max McHugh has 17 points on eight goals and nine assists. He and fellow junior Brandon Parker, who had three assists against the Huskies last weekend, are expected to play their 100th career games as Chargers in Fairbanks.

Jordan Uhelski made 31 saves in the 4-4 tie on Saturday in his 15th start and 18th game of the season. Matt Larose played last Friday for his first action since October, and he and fellow senior Carmine Guerriero have each played in seven games this season.

About the Nanooks: Alaska (8-15-3 overall, 7-10-3 WCHA) is just ahead of UAH in the WCHA standings, separated by just three points. The Nanooks were off last week after splitting a series at Bowling Green. They are 2-1-1 in their last four, all on the road.

Senior right wing Marcus Basara has eight goals and 18 points to lead the Nanooks in both categories. He had a goal and an assist in the 3-3 tie in Huntsville.

Sophomore Chad Staley had the game-winning goal against the Chargers in Alaska’s win, and is second with 15 points.  Junior defenseman Zach Frye also has 15 points, with 11 assists — two of them against UAH from earlier this season — to lead the club.