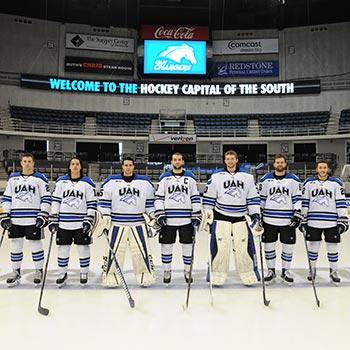 Six will be playing their final games at the Von Braun Center as UAH Chargers this weekend. They will be honored before Saturday afternoon’s game against Bemidji State.

Captain Brent Fletcher (New Westminster, British Columbia) has ten goals and 24 points in his UAH career. He is a two-time WCHA Scholar Athlete and member of the WCHA All-Academic Team.

Carmine Guerriero (Montreal, Quebec) is second in UAH’s modern Division I era and fourth all-time with a .911 career save percentage entering this weekend. His career goals against average of 3.16 is fourth in UAH’s modern D-I era and seventh all-time. Guerriero set the single-game WCHA record for saves with 76 against Michigan Tech in the 2015 WCHA quarterfinals.

Matt Larose (Nanaimo, British Columbia) has a career .896 save percentage and 3.93 goals against average in 55 games played. He was the WCHA Defensive Player of the Week twice (including this season back in October). He has been named to the WCHA All-Academic Team three times.

Matt Salhany (Warwick, R.I.) is currently tied for fourth in career games played as a Charger with 133. The speedy left wing has 16 goals and 41 points in his college career.

Regan Soquila (Maple Ridge, British Columbia) has six goals and 14 points in 98 games as a Charger. The left wing is a three-time member of the WCHA All-Academic Team.

A seventh senior, Brandon Carlson, finished his eligibility early and was honored in his final game on Nov. 19.

Fletcher nears games played record: Fletcher is close to playing more games in a Charger uniform than anyone in UAH history.

Fletcher has played 135 games at UAH, two shy of the record set by Joel Bresciani, who played 137 from 1999-2003. Fletcher is tied with Jason Hawes for second all-time.

Beavers could clinch: Bemidji State could win the MacNaughton Cup as WCHA regular season champions in Huntsville this weekend.

With a 10-point lead over second-place Michigan Tech with four games remaining, the Beavers need only one win over UAH to win the title.

If UAH sweeps BSU, the Beavers can still clinch if Michigan Tech loses either game at home to Ferris State this weekend.

The Chargers currently hold the eighth and final playoff spot, two points behind Ferris State and Lake Superior State for sixth place and two points ahead of Northern Michigan in ninth.

All kids 12 and under get free general admission courtesy of Huntsville International Airport.

Blue Line Club lunch: The final Blue Line Club lunch of the season will be Friday at noon in the Varsity Room at Spragins Hall. Terranova’s will be catering and the special guest speaker will be Bemidji State head coach Tom Serratore. UAH head coach Mike Corbett will follow and also speak to the group about this weekend’s series.