In the hunt for a berth in the WCHA playoffs, the Chargers head to Ohio to finish the regular season at Bowling Green.

UAH is in ninth place in the WCHA standings, one point behind Northern Michigan for the final conference playoff spot. They’ll need points against the Falcons and some help.

Back in November, the Falcons swept the Chargers in Huntsville by scores of 4-1 and 8-3, but the games were closer than the scores indicate. The first game was a one-goal affair until BG scored with less than two minutes to go and then added an empty-netter. UAH had the lead going into the third in the second game and was down only one halfway through the third before the Falcons again added another late goal and empty-netter (plus two garbage goals afterward). 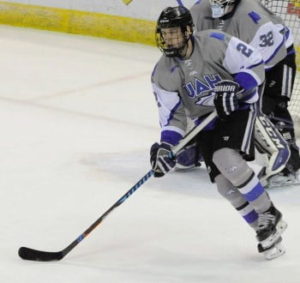 The Chargers have started to play better, going 2-2-1 after a seven-game losing streak that has them fighting to stay in the playoff chase.

Kurt Gosselin, who is tied for the team lead with nine goals, did not suit up against Bemidji. He has missed the last three games due to concussion like symptoms.

Cam Knight has 16 assists on the season, the most by a Charger since Brandon Roshko had 17 in the 2007-08 season. Knight has helpers in his last three games and five of his last seven.

Senior captain Brent Fletcher is set to break the school record for most games played this weekend. He is tied with Joel Bresciani, who played 137 games as a Charger from 1999-2003.

Junior goaltender Jordan Uhelski has a 2.82 goals against average and .904 save percentage. In the finale against Bemidji State, senior Carmine Guerriero replaced Uhelski in the second period and stopped all 23 shots he faced.

The Falcons haven’t played a conference game in three weeks, when they were swept and double shut out by Atte Tolvanen and Northern Michigan (3-0 and 2-0). BG has been shut out in three straight conference games.

Bowling Green is tied with Ferris State for fourth place in the WCHA standings. The Falcons have already clinched a playoff berth, looking to secure home ice in the first round.

Mitchell McClain, Bowling Green’s top scorer, has 16 goals (2nd in the WCHA) and 28 points (6th), but has been kept off the scoresheet in his last six games. He had a hat trick against UAH on Nov. 19.

Tyler Spezia, who scored a goal in each win against the Chargers in November, is second on the Falcons with 22 points. Chris Dufour also had two goals against UAH earlier and has 10 goals on the season.

Junior goaltender Chris Nell has a 2.35 goals against average and .902 save percentage in 26 starts this season.