The UAH hockey program will reach a milestone when it opens the season at Notre Dame. The Chargers will be playing their 1,000th game as a varsity program.

It may seem like an arbitrary milestone, but considering the situation the program was in just a few years ago, it’s not insignificant.

It’s well known that UAH is unique for having the only NCAA program in the South, a Division I play-up at a Division II school existing in a world where even large, rich universities need everything to fall into place to even consider starting a varsity hockey program.

So why did UAH promote the ice hockey program from club to varsity in the first place? In 1985, UAH was pushing to move its athletic program from the NAIA to the NCAA, and it needed sports. Hockey was logical because it already had a base of support from its success as a club program. It also had the facility with the Von Braun (Civic) Center, where the Chargers were drawing thousands per game.

It was the right setup at the right time. Could it be done in today’s climate at UAH? Considering the newest Division I programs at Penn State and Arizona State, which also had prominent teams at the club level, needed large contributions to get off the ground, it would not seem likely.

UAH didn’t really have to do much more investing to establish a varsity program in 1985, as the ingredients were already there.

The UAH athletic department officially joined the NCAA Division II ranks in 1986, with hockey in tow. The following season, with no established NCAA championship in Division II, the Chargers began “playing up” to Division I in hockey. Just by being in the big leagues, UAH had earned the reputation of being the “Hockey Capital of the South” by gubernatorial proclamation in 1987.

These early varsity seasons were a mixed bag. As an independent, UAH had schedules that were a mix of club, Division I, Division III, and Canadian programs. More Division I teams were added to the schedule over time until the 1991-92 season was mostly Division I.

The Chargers had varying results during its first Division I era, posting a record of 61-81-1.

Mario Mazzuca, a force on the 1996 D-II championship squad, is UAH’s all-time varsity record holder in goals scored with 96.

With the return of a national championship at the Division II level, UAH followed suit. Here, the Chargers were able to thrive, earning four berths in the NCAA championship and winning titles in 1996 and 1998.

By 1998, Minnesota State, Quinnipiac, and Bemidji State had switched to or announced a switch to Division I, numbering the days of the Division II championship. UAH followed and declared a return to Division I as well.

The 1998-99 season was a transitional year with a mix of Division I and III teams on the schedule. The 1999-2000 season was UAH’s first schedule that was 100 percent Division I. 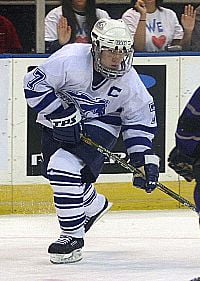 Jared Ross, the first Charger to play in the NHL, is UAH’s all-time leading scorer in the modern Division I era with 159 points.

It was also the season that the newcomers and independents to Division I needed leagues to play in. College Hockey America was formed in the summer of 1999 with UAH as a charter member.

Life in the CHA involved a lot of travel with the teams spread out, but it did provide the Chargers a means to succeed at the Division I level. UAH won regular-season conference championships in 2001 and 2003, but found a lot of heartbreak in the CHA tournament, losing in the final (and a chance at an automatic NCAA bid) four times.

Ironically, it was when the Chargers had sub-par years in the regular season did UAH finally make the NCAA tournament. They finished fifth in the CHA in 2007, but the senior-laden Chargers would run the table in the CHA tournament and make the Division I NCAA tournament for the first time. They lost to national top seed Notre Dame in double overtime in the Midwest Regional semifinals.

UAH did the same thing in 2010, taking one-goal games to win the CHA and make the NCAA Midwest Regional again, this time falling to national No. 1 Miami 2-1. 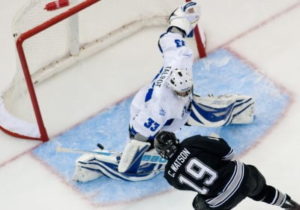 Cam Talbot, who is becoming a star with the Edmonton Oilers, anchored the UAH club that earned an NCAA tournament berth as CHA tournament champions in 2010.

However, with the other schools heading to other conferences, that was the last CHA championship, and UAH’s hockey future was very much uncertain.

UAH had applied for, and was denied, a spot in the Central Collegiate Hockey Association in 2009. The school affirmed a commitment for the program as an independent in the short term, but for a program of UAH’s size, being an independent in Division I was just not viable.

Early in the 2011-12 season, UAH announced it would relegate the hockey program back to club status, which was really a death sentence. Establishing a club team would have been tantamount to a hard reset: A new staff, new players, a new schedule — as if it was 1979 again. Who was going to organize all that if the university wasn’t?

For UAH, it is varsity hockey or bust.

Fortunately, thanks to a grassroots rally and a new university administration with a new commitment to the program, UAH was able to join a reconfigured Western Collegiate Hockey Association and survive.

The Chargers have still had their struggles, sure. Their record has been improving each year, if only little by little. But as UAH embarks on its 1,000th varsity game to begin its 33rd varsity season, we continue to remember how far this program has come, and realize how far it can go.