How UAH will fare in its fifth WCHA season will depend on several factors.

Can they shore up its defense and goaltending? Will they overcome early injuries and spark the offense? Can they manage through a grueling road schedule? Could they post another improvement in their record and make a return to the playoffs?

Here’s a look at the 2017-18 University of Alabama in Huntsville Chargers. 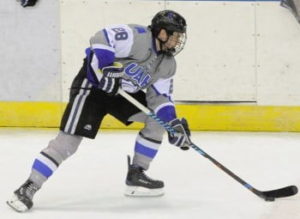 The Chargers fell to the bottom of the WCHA in scoring defense last season, allowing 3.53 goals per game. As such, defense became a point of emphasis in the preseason.

That’s not to say UAH is devoid of talent on the blue line.

“One of the biggest things that we’re keying on is our ‘D’ group,” Corbett said. “Kurt Gosselin is an all-league player. We believe Cam Knight and Brandon Parker are two of the upper-echelon defensemen in this league. That’s going to be one of our areas of strength for our team.”

Gosselin, a junior who was a third-team all-WCHA player last season, was named to the preseason All-WCHA first team in the media preseason poll and received votes in the coaches poll. He tied for the team lead in goals with nine, including a hat trick of blue-line blasts against Ferris State.

Knight and Parker each blocked 56 shots last season. Knight led the squad with 16 assists, and Parker pitched in six goals.

It will help if the Chargers can improve on their penalty killing, which was last in the WCHA at 78.5 percent.

“Everybody in our league primarily tries to play a puck-possession game, and a lot of it depends on your ‘D’ core as far as I’m concerned,” Corbett said. “We feel at this point in time with roughly three seniors [Parker, Cody Champagne, and Richard Buri] and three juniors [Gosselin, Knight, and John Teets] in our night-to-night ‘D’ core that we believe we can do a lot of positive things starting with them.”

Last season was a surprise between the pipes for the Chargers. Both experienced seniors, Carmine Guerriero and Matt Larose, struggled. The bright side was that Jordan Uhelski, who hasn’t played a regulation minute between the pipes his first two seasons, posted solid numbers (2.78 goals against average and .906 save percentage) in 23 games and 20 starts.

“We had roughly an 89 percent save percentage last year,” Corbett said. “We know at the Division I level that just doesn’t cut it, especially in our league.”

Uhelski, now a senior, will naturally be the No. 1 coming in, backed up by two freshmen that Corbett feels can help right away.

Mark Sinclair joins the Chargers after helping lead the Chilliwack Chiefs (BCHL) to the championship round of the Western Canada Cup.

“Mark has shown very well in the preseason that he’s able to come in and contribute in net for us,” Corbett said. “We’re excited about that.”

Josh Astorino was the Ontario Junior Hockey League’s top goaltender with a .936 save percentage for the Georgetown Raiders. 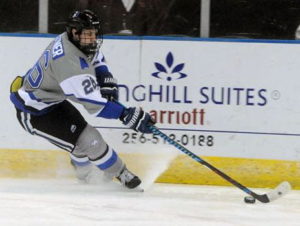 Once again, the question for the Chargers is whether they can score more goals. UAH was ninth in the WCHA last season at 2.18 goals per game. They also didn’t fare well on the power play, converting only 10.8 percent of opportunities.

It won’t be easier as the Chargers are already battling key injuries in the preseason, including senior center Max McHugh, who will be out to start the campaign. McHugh was second on the team with eight goals and tied for second with 19 points last season, and at 64 career points has been UAH’s most productive scorer in a decade.

“Unfortunately we’ve had some injuries to our centers, so we’re hoping to get them back by once the conference season starts,” Corbett said. “Some of our freshmen whom maybe we didn’t expect to come in and contribute as much as we wanted them be big contributors will have to step up and fill up a little bit of those minutes playing down the middle.”

UAH still has the services of last year’s leading scorer Josh Kestner, who will be key in his final season with his hometown team. Kestner had a breakout season in 2016-17 with nine goals and 22 points.

“Josh Kestner is one of the players that the media needs to watch,” Corbett said. “He’s one of those kids that shoots the puck very well and he’s a natural goal scorer. We have to find ways to be able to get him the puck and put him in position to put pucks in the net for us.”

As for the freshmen forwards who may see extra time because of the injury bug, Corbett has five to choose from.

“Connor Merkley is a big left winger that plays a good 200-foot game,” Corbett said. “We’re probably going to put him in our top six to start and he’s going to get an opportunity to play some of those minutes right off the bat. He’s an older player we feel can contribute.

“Andrew Dodson is another one. [Both he and Merkley] played at Carleton Place, a very successful junior team. These are kids with dynamite character who know how to win.

“Christian Rajic, who played at Oakville, Ont., is another young man we believe will come here and play some serious minutes from the start of the year.”

The other newcomers are Connor Wood and Levi Wunder. Wood is from Buford, Ga., giving the Chargers five players from the Southeast, the most UAH has ever had as a varsity program.

“[The schedule] is something we’ve broken down,” Corbett said. “It’s a little bit like an NFL season, the four quarters of the old NFL. We’re all or nothing: We’re either going to be all at home or all on the road.”

UAH opens the season with an 8-game road trip comprising of its entire non-conference schedule and a trip to Michigan Tech to start WCHA play. It starts this Friday at No. 8 Notre Dame, which made Frozen Four last April. Also included are visits to Cornell, another NCAA tournament team, and Arizona State.

The 12-game road swing, which runs through all of December and most of January, is particularly tough. The Chargers go to Northern Michigan, Bowling Green, and Minnesota State in back-to-back-to-back weeks. After a week off for Christmas, it’s on to Bemidji State. Directly from Bemidji, the Chargers go to Alaska, where they’ll spend two weeks playing series at Fairbanks and then Anchorage.

“It’s just more cost effective for us to do that,” Corbett said. “We’re going to have kids who are not going to be on campus for roughly 5 1/2 weeks, because they are going to go home for Christmas after our Mankato series. It’s going to be a unique situation, so we have to manage that.

“One thing we do a good job of is the communication with our players, and they are going to have to communicate with us on how they are feeling, not just how they’re practicing, but their energy levels. That three week stretch through Christmas is going to be big.”

Once that mega-trip is over, the Chargers can stay at home for the rest of the regular season, which could help their playoff push. They’ll need to play better at home, however, as they were 2-10-2 at the Von Braun Center last season.

The outlook doesn’t look great if you go by the preseason media and coaches’ polls, which have the Chargers finishing ninth in the WCHA standings and missing the playoffs for the third straight year. Perhaps that’s to be expected when there are a number of questions that need answering.

Still, UAH has improved its record each year since joining the WCHA, if only slightly each time. Corbett says the Chargers are committed to continue that improvement and build that solid foundation within the program by growing fan and alumni involvement.

“Some of those ties we’ve got to turn into wins. Those one-goal loses, we’ve got to turn them into ties and wins. Can it be frustrating at times? Sure, but we don’t let that affect us. We’re a positive group here. We keep looking at those positive things, understanding that those things are going to come if we continue to do things the right way around here.”