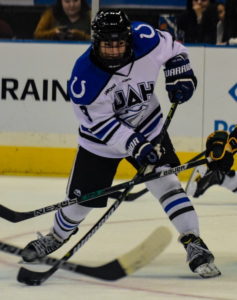 Christian Rajic had a goal and an assist vs. UAA last week. The freshman has 3 goals and 3 assists so far. (Photo by Todd Thompson)

The Chargers dominated the first game 5-1, with Brennan Saulnier scoring two goals. They rallied from two goals down in the third period to tie the second game 3-3, with Connor Merkley getting the equalizer with 0.9 seconds remaining in regulation. UAA won the extra point in the WCHA standings in a shootout.

Josh Kestner scored twice in the second game. He and Saulnier have six goals, tied for the team lead and fourth in the WCHA overall leaders.

Cam Knight had three assists in the series, giving him a team-leading six for the year. Kurt Gosselin had a helper to give him seven points, tying him for fifth in the WCHA in defenseman scoring.

In goal, Jordan Uhelski made 16 saves on Friday and 31 on Saturday, raising his save percentage to .901.

UAH went 4-for-10 on the power play for the series.

About the Lakers: Lake Superior State (2-7-3 overall, 1-3-2 WCHA) comes to Huntsville after a tie (with shootout loss) and a loss at Bowling Green last weekend.

The Lakers have already played in four overtime games this season, going 1-0-3. One of those ties was at then-No. 1 Denver, with goaltender Nick Kossoff needing to make 63 saves.

Kossoff, a junior, and freshman Mareks Mitens have split the goaltending duties with six starts apiece.

Senior forward J.T. Henke is tied with Minnesota State’s C.J. Seuss for the WCHA’s overall scoring lead with 15 points. He leads the league in assists with 12.

Series notes: Lake Superior State leads the all-time series over UAH 10-6-2. The Lakers won all four meetings against the Chargers last season. LSSU has a 7-1-0 advantage in Huntsville.