Christian Rajic scored three goals, earning UAH’s first hat trick by a freshman since 2002, to lead the Chargers to a 5-3 victory over Lake Superior State on Saturday at the Von Braun Center.

Rajic has UAH’s first hat trick since Kurt Gosselin did it against Ferris State last season, and the first by a Charger freshman since Jared Ross against Bemidji State on March 9, 2002.

The Chargers needed all of that from Rajic and Uhelski as the Lakers kept threatening to dismantle two three-goal leads. They fired 44 shots on Uhelski, including 21 in the third period.

UAH scored the first goal of the game halfway through the first. On the Chargers’ first power play, Kurt Gosselin blasted a Brennan Saulnier pass at the 10:32 mark for his third goal of the season. Connor James also got an assist.

With 5:08 left to go, UAH made it 2-0. Tyler Poulsen made a drop pass to Brandon Salerno, and his shot was tipped by Christian Rajic past Laker goaltender Nick Kossoff.

Poulsen got another assist on a feed to Saulnier with 1:54 to go in the first. Saulnier beat Kossoff from the right circle for his team-leading seventh goal of the season and a 3-0 Charger lead.

Lake Superior prevented a clean sheet for UAH in the first with a power play goal in the last minute. Brayden Gelsinger beat Jordan Uhelski from the right side to cut UAH’s lead to 3-1 at the first intermission.

Lake Superior drew within one when Josh Nenadal found the net from the doorstep on Uhelski’s left at 7:19 of the second. 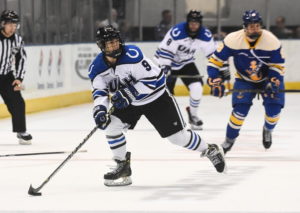 Christian Rajic had UAH’s first hat trick by a freshman since Jared Ross did it in 2002. Click for gallery. (Photo by Todd Thompson/Rivercat Photography)

Then Rajic made some history.

Halfway through the game, Rajic put in a rebound on a Madison Dunn shot and a scramble to put UAH up 4-2 at the 8:09 mark.

Just 1:45 later, from near the boards on the left side of the offensive zone, Rajic scored his third goal of the game and the Chargers led by three again.

Rajic now has six goals in his freshman campaign.

The Lakers pulled Kossoff at that point after he allowed five goals on 23 shots. Freshman Mareks Mitens took over in net.

Max Humitz cut UAH’s lead to 5-3 at the 11:11 mark of the second, and that was the score at second intermission.

After all that scoring in the first two periods, there were no goals in the third, but not for lack of effort, particularly by the Lakers. They fired 21 shots on goal against Uhelski to only UAH’s five on Mitens.

Mitens ended up stopping all 11 shots he faced.

UAH finishes its homestand with a two-game series against Ferris State next Friday and Saturday. Both games at the Von Braun Center start at 7 p.m.