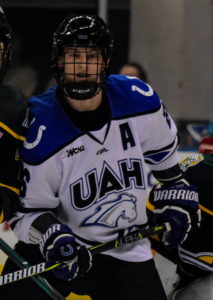 Josh Kestner has been on a goal-scoring pace not seen at UAH in over a decade. (Photo by Todd Thompson/RiverCat Photography)

Some statistical analysis as we hit the halfway point of the season:

• UAH is only 1-7-0 on Fridays, with the lone win coming against last-place Alaska Anchorage at home. The Chargers are 5-2-1 on Saturdays, with the two losses coming against non-conference foes Notre Dame and Cornell on the road and both currently ranked in the top six. Five of the eight series this season have been win-loss splits, including the last three weeks.

• The Chargers are scoring 3.30 goals per game in WCHA play, second in the league behind Minnesota State (3.80). UAH is tops in power play efficiency in conference games at 25.0 percent.

• Josh Kestner has 10 goals in 16 games this season, already a career high for him and more than his team-leading nine goals last year. He’s the first Charger to reach double-digit goals at this point of the season since both Jared Ross and Bruce Mulherin did it in the 2004-05 season. Kestner is third in the WCHA in overall goals scored and first in power play goals with five. Nationally, Kestner is 19th in goals per game (0.62) and tied for fourth in power play goals (five).

• Now that Jordan Uhelski has played over 1,500 career minutes at UAH, he qualifies for ranking in the program’s all-time leader boards. His .907 save percentage would be sixth all-time and fourth in the modern Division I era, just behind Cam Talbot (2007-10). His 2.81 goals against average would edge him over Steve Briere (1997-2000) for fourth all-time and second in the modern Division I era (behind Scott Munroe’s 2.76).

• For those of you who still care about goaltender win-loss records, Uhelski already has 12 career victories in two seasons, matching Carmine Guerriero’s four-year total. Uhelski has made 33 starts, while Guerriero made 72. Uhelski is getting more goal support now that the Chargers are scoring about a half goal per game more than last season, and about 1.5 goals per game more than Guerriero’s first season (2013-14).

Recruiting update: Last week, UAH received a commitment from Drew Lennon, a 6-foot-2, 180-pound defenseman playing for the Lone Star Brahmas in the NAHL. Lennon, who is originally from Illinois, has played junior hockey all over the continent these past few years. After starring with Rocky Mountain Roughriders U16 AAA team in 2014-15, he went on to play for the Connecticut Oilers in the EHL in 2015-16, and the Prince George Spruce Kings in the BCHL last season. Drew is known for his strong defensive play and skating ability. His size and reach make him difficult to play against, and he’s yet to reach his offensive ceiling. Through 27 games this season, he has two goals and five assists, but has a goal and three assists in his last eight games, so he’s starting to heat up.

Bauer Neudecker signed his National Letter of Intent with UAH, so he’ll be a member of the 2018-19 freshmen class. He has five points in 17 games for the Dubuque Fighting Saints of the USHL, the same team the produced UAH captain Max McHugh.

Tyr Thompson, another forward expected in the 2018-19 recruiting class, has been playing at a near point-per-game pace this season (31 points in 29 games) for his Whitecourt Wolverines (AJHL) squad. Thompson and Neudecker headline what is shaping up to be another solid recruiting class for Coach Corbert and his staff. — Asher Kitchings

WCHA media poll: The Chargers are currently sixth in the latest WCHA Media Poll, conducted by Tech Hockey Guide. UAH fell a spot from fifth after the Chargers split at Northern Michigan over the weekend.

UAHHockey.com has a vote in the poll, which has a representative covering each WCHA program.