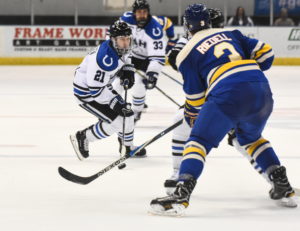 On Friday, Christian Rajic scored the game’s first goal, the seventh of the season for the freshman, but NMU scored two straight shorthanded goals and held off the Chargers, 3-1. Tyler Poulsen had his team-leading 10th assist.

On Saturday, Josh Kestner scored the game-tying goal late in the second period and the game-winner early in the third as UAH won 3-2. The senior Huntsville native now has 10 goals to lead the team. John Teets scored his third goal of the season, and Madison Dunn pitched in two assists.

This is the second of six straight road series for the Chargers.

About the Falcons: Bowling Green (7-5-5 overall, 6-2-4 WCHA) earned four points at home against Bemidji State last week, winning 3-1 and tying 3-3 (losing the point after in a shootout). The Falcons moved ahead of idle Minnesota State atop the WCHA standings with 24 points.

Sophomore goaltender Ryan Bedard, a Florida Panthers prospect, leads the WCHA and is ranked ninth in Division I in both save percentage (.927) and goals against average (2.02). The Falcons also have freshman Eric Dop, who earned WCHA Rookie of the Week honors for last week’s 24-save, one-goal-allowed performance in the win over Bemidji State.