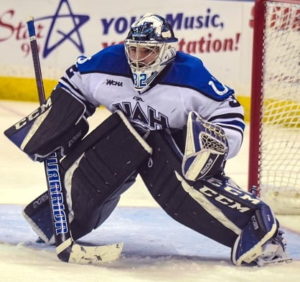 Jordan Uhelski’s .908 save percentage is 6th in the WCHA. (Photo by Todd Thompson/RiverCat Photography)

Charger update: UAH (6-10-2 overall, 5-5-2 WCHA) got two points after a tie and a loss at Bowling Green last week. The Chargers sit in sixth place in the WCHA standings, one point behind Ferris State and one point ahead of Alaska.

In the first game, Josh Kestner scored twice as the Chargers and Falcons battled to a 3-3 draw. UAH earned its first ever point after tie by winning the shootout. Madison Dunn scored the first goal.

UAH couldn’t muster much offense at all in game two, getting only 12 shots on goal in a 3-1 loss. Tyler Poulsen scored a third-period goal to put the Chargers in striking distance.

Jordan Uhelski stopped 39 of 42 Bowling Green shots to keep UAH in it on Saturday, and made a total of 63 saves on the weekend.

Kestner has 12 goals on the season, tying him for second for the WCHA lead and already matching the high for a Charger in the last 10 years. Ten of those 12 have come in conference play, which tops the conference. His overall 16 points is tied for sixth in the league.

This is the third of six stops for the Chargers in this long road swing. After taking next week off for the Christmas holiday, UAH goes to Bemidji State, Alaska, and Alaska Anchorage back-to-back-to-back.

About the Mavericks: Minnesota State (11-5-0 overall, 9-3-0 WCHA) rolled all over the Lakers at Lake Superior State last weekend, winning 5-1 and 7-0. The Mavericks stand in second place of the WCHA, one point behind Bowling Green, but MSU has played two fewer games.

The Mavericks are ranked No. 7 in this week’s USCHO.com and USA Today/USA Hockey Magazine polls.

The 12 goals last week boosted the Mavericks’ average in conference games to 4.17, leading the league by over a full goal over the second-place Chargers. Their overall scoring average of 3.75 puts them third in Division I.

Minnesota State has many offensive weapons, a big reason why the Mavericks were picked to win the MacNaughton Cup as the WCHA regular-season champion. Eight players have double-digit points, and ten have at least four goals this season.

Leading them is Zeb Knutson, who has eight goals and 20 points, tied for the top in WCHA overall scoring. C.J. Seuss (formerly Franklin), a Winnipeg Jets prospect, is right behind him with a 18 points (fourth in the WCHA) and a team-leading 14 assists. Freshman Jake Jaremko’s 17 points gives the Mavericks three of the WCHA’s top five overall scorers.

Between the pipes, Connor LeCouvee, a senior transfer who played the last three seasons at Boston University, has a 2.02 goals against average (second in the WCHA) and .912 save percentage (fourth in the WCHA) in nine starts. Junior Jason Pawloski has a 2.47 GAA and .905 save percentage in seven starts.