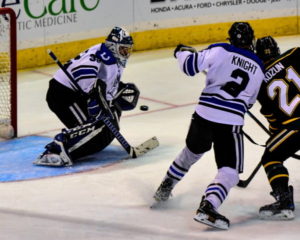 Jordan Uhelski made 36 saves against Minnesota State on Friday, raising his save percentage to .906 on the season. (Photo by Todd Thompson/RiverCat Photography)

Next up is a trip unprecedented, but also not.

The Chargers visit Bemidji State for their next series on Dec. 29-30. After that, they fly directly from Bemidji, Minnesota, to Alaska, where they have a series at Fairbanks on Jan. 5-6. Then they will bus down to Anchorage to face the Seawolves on Jan. 12-13. Then they can finally return to Huntsville.

This is the first time since joining the WCHA that UAH will visit both Alaska teams in one trip. Including the visit to Bemidji, the Chargers will be literally out of town for nearly three weeks, which hasn’t happened before.

However, the program has seen this kind of trip before, albeit compressed. Instead of six games in three weeks, UAH twice played five games in one week during its first foray into Division I.

While UAH will have more time between games on this trip, it will still be a slog. It will be the last trip the Chargers will have for a while though: They will have an off week upon return to rest, then the last four series of the regular season will be at home.

Bemidji State is tied with UAH for sixth place in the WCHA standings, and the Alaska teams are behind the Chargers. Attaining at least a .500 record on this trip is plausible, and doing so will put UAH in prime position to clinch a spot back in the WCHA playoffs in that final home stand.

Saulnier suspended: The Chargers will start the long journey without Brennan Saulnier in the lineup. The WCHA on Monday issued a two-game suspension to Saulnier for his hit on Minnesota State’s Dallas Gerads in the last minute of Saturday’s 3-0 loss in Mankato.

Saulnier’s elbow made contact to Gerads’s head. Saulnier was given a game misconduct penalty when it occurred, and the league issued the additional punishment after reviewing the video.

This is the third suspension of his UAH career for Saulnier, who has a career-high seven goals this season.

Pro update: Cam Talbot (2007-10) has been strong for the Edmonton Oilers since returning from injury reserve. Talbot, who missed two weeks with an upper-body injury, has stopped 52 of 57 stops against Minnesota and San Jose in his last two starts. He has a 2.96 goals against average and .903 save percentage in 24 starts this season.

Matt Salhany (2013-17) was traded from the Reading Royals to the South Carolina Stingrays in the ECHL on Dec. 5. He has played a combined seven games between the two teams. Carmine Guerriero (2013-17) started the season with the Stingrays, but he was let go after starting one game between the pipes. He stopped 30 of 31 shots against Orlando on Nov. 26.

Cody Dion (2010-11) is in his third season with the Peoria Rivermen of the SPHL. He has 13 points in 16 games, with one of his six goals coming against the Huntsville Havoc on Dec. 9.

To keep up where former Chargers are playing in the pros, please visit our Chargers in the Pros page.