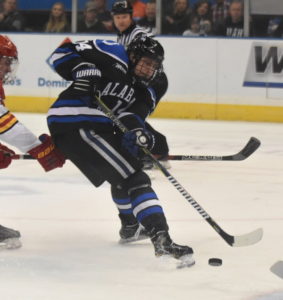 Madison Dunn, who has three goals and five assists, leads UAH with a +8 rating. (Photo by Todd Thompson/RiverCatPhotography)

Charger update: UAH (6-12-2 overall, 5-7-2 WCHA) was swept at seventh-ranked Minnesota State two weeks ago, falling 5-1 and 3-0. Tyler Poulsen had the lone goal for the series, his fifth of the season.

The Chargers are tied with this week’s opponent, Bemidji State, for sixth in the WCHA standings, with 18 points.

This is the fourth series of six straight on the road. The Chargers will be on the road continuously for the next three weeks, going from Bemidji to Fairbanks to Anchorage.

UAH will be without Brennan Saulnier for this series at Bemidji. Saulnier, who has seven goals this season, was suspended by the WCHA for two games for a contact to the head penalty in the final minute of the second game at Minnesota State.

About the Beavers: Bemidji State (7-6-5 overall, 4-4-4 WCHA) is undefeated in its last five games. The Beavers swept Alaska Anchorage at home two weeks ago by scores for 5-1 and 4-0.

It’s been a tougher start than expected for the defending MacNaughton Cup champions. The Beavers, picked to finish second in the media and coaches preseason polls, is tied with UAH for sixth in the WCHA standings.

BSU is led by their senior goaltender, Michael Bitzer. While not posting the All-American numbers from last year, Bitzer still has three shutouts, including his 19th career blank slate against UAA. He was the latest WCHA goaltender of the week.

Senior forward Kyle Bauman leads the Beavers with 19 points, tied for sixth in the WCHA. Junior forward Jay Dickman is tied for fourth in the league with 10 goals after getting his second hat trick of the season against Anchorage.

Series notes: UAH has played Bemidji State 82 times, the most of any opponent. BSU holds the series lead at 47-30-5, with a 26-9-2 record in Bemidji. Last season, the teams split a series in Huntsville, with the Beavers winning 3-2 and the Chargers winning 5-2.