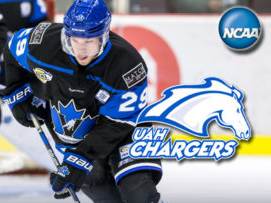 Ben Allen will be joining the Chargers next season.

Two members of UAH’s 2018-2019 freshmen class were on the move this past week in trades that were likely perpetuated to give both players more ice time in their final seasons of junior hockey.

Ben Allen (Allen, Tex.), a 1997-born forward who had been with the Penticton Vees of the BCHL, returned to the Saskatchewan Junior Hockey League, where he played last season. The Vees had 10 — yes, TEN — forwards committed to NCAA D-I hockey programs alone, so it’s no surprise that ice time was hard to come by.

Allen, who had four goals and seven assists with Penticton, will now be on a playoff-bound Melfort Mustangs squad where he’ll be counted on to play top-six minutes and put up points.

Bauer Neudecker (St. Louis Park, Minn.), the aptly named former Mr. Hockey candidate from hockey-mad Minnesota, was traded from the team that drafted him this past May, the Dubuque Fighting Saints, to the Sioux City Musketeers.

The trade is already paying dividends as Neudecker scored a goal, his first of the season, in his first game as a Musketeer in the U.S.’s top junior circuit, the USHL.

Expect these two future Chargers to see a spike in productivity with increased roles on their new squads.