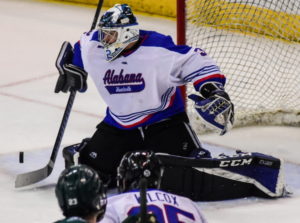 Jordan Uhelski makes one of his 30 saves. (Photo by Todd Thompson/RiverCat Photography)

This weekend, the Chargers are wearing throwback jerseys commemorating the 20th anniversary of the 1998 NCAA Division II national championship team, who defeated Bemidji State for the title.

Friday night had the feeling of that time. The Chargers took down the Beavers again, a 5-1 decision in their first game at the Von Braun Center in two months.

The Chargers stayed in sixth place in the WCHA standings, moving to seven points behind fifth-place Michigan Tech (a 4-3 loser to Ferris State).

Also making a long-awaited appearance was Max McHugh, who hadn’t seen action this season because of injury. The senior captain got an assist in his debut, a nifty pass from the left circle to a scoring Hans Gorowsky in the second period for UAH’s third goal.

The rivals will meet again Saturday night as members of the 1998 championship team will be honored during the first intermission.

UAH pulled out to a 4-0 by 3:10 of the third period, getting to Bemidji’s All-American goaltender Michael Bitzer early. 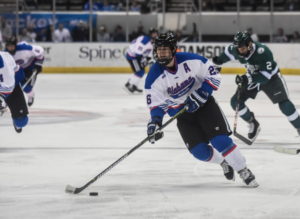 Josh Kestner breaks away in the first period. He would score his 17th goal of the season for a 1-0 UAH lead. (Photo by Todd Thompson/RiverCat Photography)

John Teets intercepted a Beaver pass near the benches in the neutral zone, and forwarded the puck to Josh Kestner. Kestner made a move around a BSU defenseman for a breakaway, and wristed the puck over Bitzer. His 17th goal of the season came at the 6:36 of the first period.

Bemidji State picked up the pace afterward, and kept Uhelski busy. The Beavers picked up the next 11 shots on goal, including five during a power play.

But Uhelski kept his cool, and finished the first period with 14 saves.

The Chargers got two more in the second period.

At 3:34, Madison Dunn ripped a one-timer off a faceoff win by Christian Rajic to make it 2-0. It was Dunn’s fourth goal of the season.

UAH made it 3-0 with 2:51 on the power play. Hans Gorowsky in the slot deflected McHugh’s pass from the bottom of the left circle for his fourth goal of the season and McHugh’s first point. Kurt Gosselin also got his seventh assist.

In the third, Tyler Poulsen notched his sixth goal of the season with an assist by Dunn at the 3:10 mark and UAH led 4-0.

With 4:34 to go, Adam Wilcox upended BSU’s Brendan Harris, who was favoring his left leg as he was helped off the ice. Wilcox got a five-minute major for kneeing, giving the Beavers a power play the rest of the way.

UAH’s penalty killing was solid from there. BSU pulled Bitzer for a 6-on-4 situation with under two minutes to go.

Dunn then scored his second goal of the game and third point of the night when he found the empty net clearing the puck from the UAH zone. The shorthanded finished the 5-1 score.