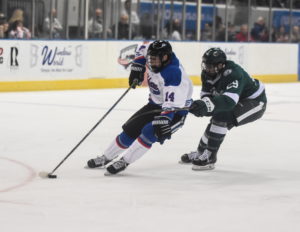 UAH currently sits in seventh place in the WCHA standings with six games to go. The top eight go to the WCHA playoffs.

Josh Kestner opened Friday’s victory with his 17th goal of the season, which ties him with Northern Michigan’s Robbie Payne for most in the WCHA. In league play overall, Kestner is on top alone with 15 goals.

Senior captain Max McHugh made a solid return to the lineup, making his season debut Friday with an assist. He scored his first goal of the season for the lone UAH tally on Saturday.

Tyler Poulsen and a goal on Friday and an assist on Saturday, giving him 19 points on the season. He leads the Chargers with 13 assists.

Senior Brennan Saulnier, who is tied for second on the team in goals and tied for third in points, will miss this series and the next as he is suspended for his actions on Saturday.

About the Wildcats: Northern Michigan (17-10-3 overall, 15-5-2 WCHA) is hands down the surprise team in the WCHA under first-year head coach Greg Potulny. The Wildcats have won six straight games, all in conference, to move to the top of the WCHA standings and enter the USCHO poll at No. 19.

NMU has a number of offensive weapons. Troy Loggins and Adam Rockwood lead the WCHA in overall points with 32, and Darien Craighead and Philip Beaulieu are tied for seventh with 25.

Craighead and Loggins are second in the league in overall goals with 15, and Robbie Payne is tied with Kestner at the top with 17. Loggins scored two goals in the series against UAH in Marquette in December.

Rockwood, who has a seven-game scoring streak, leads the country in assists with 25.

Goaltender Atte Tolvanen is fourth in the league in overall goals against average at 2.52.