UAH rallied from a two-goal deficit, but 19th-ranked Northern Michigan scored with 6:41 remaining to defeat the Chargers 4-3 at the Von Braun Center on Friday.

But NMU wouldn’t get on the board until UAH’s first power play, taking advantage of a turnover. Zach Diamantoni got a breakaway and scored with 4:13 left in the first period for a 1-0 Wildcat lead. It was Northern Michigan’s seventh shorthanded goal, which leads the nation. 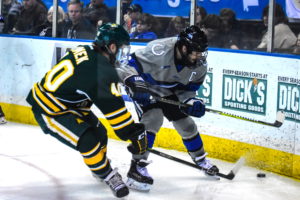 NMU made it 2-0 on the power play, as Joseph Nardi scored with 11:13 left in the second period.

“In the beginning of the first we kind of looked a little slow so they got a good jump on us,” UAH junior defenseman Kurt Gosselin said.

“We just need to play faster,” UAH head coach Mike Corbett said. “That was the biggest thing. We held on to the puck a lot and let them get set up so they were able to defend us. To me, that’s what hurt us early in the game. They played fast and we weren’t moving the puck.”

UAH answered with a power play goal with 4:24 remaining in the frame. Gosselin found Hans Gorowsky in the slot, and while his shot was not the most powerful, the puck went between Atte Tolvanen’s legs for Gorowsky’s fifth goal of the season.

“I was hopping off the bench, and one of my D partners yelled shoot the puck once you get it off the draw,” Gosselin said. “So I walked the line, shot it — it actually shot Goro in the stomach and he got a lucky bounce, hopped down and he put it on net.”

The Wildcats got another power play goal to regain their two-goal lead at 3-1. Mitchel Slattery scored with 1:26 left in the period.

But the Chargers answered again with just 22.6 left in the second, as Tyler Poulsen notched his seventh goal of the season, skating in on Tolvanen almost unabated.

Josh Kestner tied the game at 3-3 with 10:57 left. Gorowsky won the offensive-zone faceoff and got it to Kestner, who roofed it in the upper left corner of the net over Tolvanen for his WCHA-leading 18th goal of the season.

“Hans was good,” Corbett said of Gorowsky’s two-point game. “The power play goal kind of hit him and he was able to turn around (on it). On Kestner’s goal, like we told him: ‘Get the puck to him. He shoots.’ Quick face-off goal and we were able to tie it up.

“Hans is a warrior for us. He plays a lot of minutes, and now he’s playing power play and penalty kill. It’s nice to see him get some points along the way.”

“It’s good that we’ve got good morale every time we’re down,” Gosselin said. “I think one big thing is our goalie. Uhelski has been the backbone of this team since day one. I think without him giving that little extra boost, games would be a little more different. Since he’s been able to help us, we’ve been able to rally off it, create some chances, and pull out some wins.”

Uhelski finished the game with 31 saves, including a crucial cover during a late NMU power play when Troy Loggins had an open net, and another on a one-time blast.

However, Loggins would eventually not be denied, scoring his 16th goal of the season with 6:41 to go. It was his 33rd point, the most overall in the WCHA.

Corbett liked how the Chargers were able to rally and get that tying goal. “Now it’s winner take all the last 10 minutes and they get a bounce on their fourth goal, a bounce that goes to their best player. That hurts you.”

“Just play faster, I think that’s the biggest thing,” Corbett said. “And that’s going to be the biggest question mark, too. Last weekend we were kind of out of gas the second night [5-1 loss to Bemidji State] and I’m hoping we come out and play faster. Let the puck do the work and not run around, not waste our energy.”

“We’ve just got to bring some energy and start finishing our checks, too,” added Gosselin.

Notes: Jordan Larson returned to the lineup after missing the last two games with a concussion. Andrew Dodson also was back from an injury.