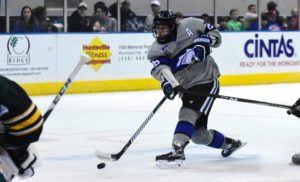 Josh Kestner was named to the All-WCHA Second Team on Thursday, becoming the first Charger to reach that high in all-league honors.

Kestner tied the UAH modern Division I era record with 24 goals this season. The senior’s 32 points were the most by a Charger since the 2006-07 season. Kestner tied for the WCHA lead with 19 goals in conference play, while scoring a league-best nine goals on the power play.

Kestner finished his UAH career with 44 goals, sixth most in the modern Division I era.

It marks the second straight year a Charger made the all-WCHA teams. Kurt Gosselin became the first with third team honors last season, and Max McHugh made the all-rookie team for 2014-15.

Kestner signed an amateur tryout contract with the Toronto Marlies of the American Hockey League, the Maple Leafs’ top affiliate.