The Chargers are coming off another season of growth, reaching 12 overall wins for the first time in eight years. They had their best finish in the WCHA standings, seventh place, and took second-seeded Northern Michigan to three games in the quarterfinals.

“We took good strides last year,” UAH head coach Mike Corbett said. “We’ve continued to make strides in my time here, little by little. Sometimes it’s not as fast as you want it to go, but I think we continue to take positive strides and that’s what we’re looking to do again this year.”

It won’t be easy. The preseason polls have UAH holding steady at best and missing the playoffs (albeit barely) at worst. That’s not stopping Corbett, who enters his sixth season at the helm, from being excited about this year’s team.

“What I really like about our team right now is our leadership group,” Corbett said. “We have John Teets and Kurt Gosselin and Madison Dunn and Hans Gorowsky as our big leadership group as four seniors as four players that we’re going to rely on heavily moving forward. That group has really done a good job all summer.

“We had more guys stay this summer than we have in past years. Those guys did a very good job over the offseason and their training and getting our group all on the same page.”

Here’s a look at the 2018-19 University of Alabama in Huntsville Chargers. 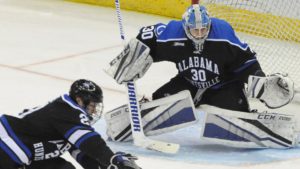 It’s unclear who will be between the pipes when the Chargers open the season Saturday at Miami. Currently, UAH’s two best options are sophomore Mark Sinclair and senior Jake Theut, a graduate transfer from Northeastern.

“Those are going to be our two guys who are going to be battling for playing time,” Corbett said. “Both unproven for the most part, but I have confidence in both of them.”

Sinclair played in seven games last season, starting five, as a backup to Jordan Uhelski (who is now at Miami as a graduate transfer). Sinclair had a 3.67 goals against average and .876 save percentage.

“Sinclair didn’t necessarily have great numbers last year, but as a sophomore he does know what it’s like to be in the WCHA,” Corbett said.

Theut played in only 74 minutes in five games over two seasons at Northeastern. He did get a shutout in his lone start.

“Jake’s a kid who comes in from Northeastern, coming from a winning program, roommates with the Hobey Baker Award winner last year [Adam Gaudette],” Corbett said. “He knows what it is and he brings a very unique perspective into our program, and that’s really helped our guys throughout the preseason. He’s a vocal guy and a good leader in himself.” 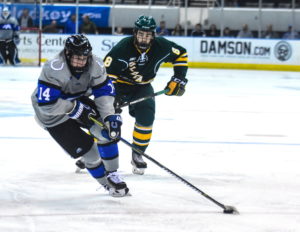 The Chargers were still not one of the more prolific scoring teams last season, finishing seventh in league play at 2.46 goals per game. And that was with the breakout performance of Josh Kestner, who tied UAH’s modern Division I era record for goals in a season with 24.

Kestner and Tyler Poulsen, who had 26 points in 2017-18, are gone, begging the question: Who will be the Chargers’ primary threats with the puck?

“We have to turn around and see who’s going to be to pick up that slack,” Corbett said. “Up front, it’s going to be a little bit by committee. Hans Gorowsky, Madison Dunn, and Christian Rajic have to take their game to another step, another level.”

Gorowsky and Dunn are the senior leaders up front. Each scored five goals last season. Dunn pitched in 10 assists, while Gorowsky showed his mettle on special teams. Rajic scored nine goals in his freshman campaign, including a hat trick against Lake Superior.

However, everyone will be expected to increase production in some way, according to Corbett. “The guys who got five, need to get eight. The guys who got eight, need to get ten. I want four lines that are going to look the same, and just come at you in waves. It’s going to be all 20, 21 guys being able to contribute and being very hard to play against.”

“The guys coming back, as much as I like them, it’s tough to get points, it’s tough to score goals in our league, and eventually, you’re going to need goals to be able to win games,” Corbett said. “We’re a little bit unproven as far as a consistent, point-producer and who’s going to be that go-to guy for us.”

UAH has four freshmen forwards who could make immediate impacts. Bauer Neudecker comes to Huntsville after a strong second half to last season in the USHL at Sioux City (20 points in 36 games following a trade). Jack Jeffers had 79 points at Markham (OJHL). Tyr Thompson had 46 points in 54 regular-season games at Whitecourt (AJHL). Ben Allen had seven goals and seven assists in 16 games following a trade to Melfort (SJHL).

While the offense and goaltending are unproven, the defense has plenty of experience. UAH was seventh in the WCHA in goals allowed (3.27 per game) in 2017-18, nearly a half-goal improvement over the year prior.

“We have Kurt Gosselin, who I believe can be an all-league player, John Teets, and Cam Knight, three senior defensemen who are a big part of our program,” Corbett said. “That’s where our experience is on the back line. You have guys like Sean Rappleyea and Connor James who are ready to make a step. We could have five upperclassmen in our six or seven if we choose to do that moving forward into our first weekend.”

Gosselin was UAH’s first all-league selection in 2016-17, earning third-team All-WCHA honors. That season, he showed he can be a threat from the blue line, scoring nine goals to lead the team. Gosselin has 16 career goals at UAH, fifth in the modern Division I era for defensemen, and six more goals would put him on top in that category. He comes into 2018-19 as UAH’s active leading scorer with 43 points.

The team’s second active leading scorer is Knight with 35. He and Gosselin led the Chargers in defenseman assists last year with 11.

Teets blocked 48 shots last season, second only to Gosselin’s 55. UAH was second in the WCHA in blocked shots last year.

Rappleyea and James are juniors. James played in 16 games last season, but Rappleyea did not see action (he played 12 games in his freshman year).

Further, the Chargers have a number of freshmen who Corbett will give playing time right away.

“We’ve also brought in some freshman who I think are going to have to contribute,” Corbett said. “I want them to, and I’m going to throw them in there. I’m the type of guy who throws his freshmen right in there. We didn’t bring them in here not to play them. There’s going to be some competition with Drew Lennon, Dayne Finnson, and Bailey Newton. We have some guys who we’re going to really push. I like our depth back there and the competition we’re going to have.”

According to Corbett, the chances for success this season boil down to preparation and details. Winning the battles in front of the net will be crucial.

Last season, the Chargers had an odd and beastly schedule, with long home stands and even longer road trips, including a Bemidji-to-Alaska trip that covered over two weeks. Corbett said that experience will help the team this season.

“That experience that we had last year, of how to take care of ourselves, how to travel — it’s going to be easier. It’s only going to help us moving forward. Compared to last season, it’s going to be a cakewalk and our boys can handle it pretty good.”

UAH will have a more reasonable schedule this time, with a solo trip to Alaska and no home stand or road swing longer than six games. The Chargers look to take that next positive stride beginning this Saturday and Sunday at Miami (Ohio). The home opening series is Oct. 19 and 20 against Arizona State, followed by the start of WCHA play Oct. 26 and 27 against Lake Superior State at the Von Braun Center.