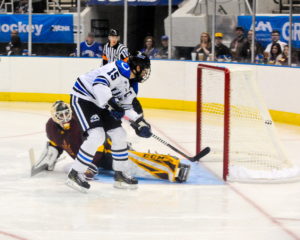 Hans Gorowsky scores on a breakway early in the second period. (Photo by Doug Eagan)

After two rough road weekends, the Chargers played their best game of the season in their home opener, but came up short Friday in a 2-1 defeat against Arizona State.

UAH (0-5-0) had plenty of chances to score more, outshooting a continuously growing Sun Devils team by a 27-19 margin.

“I liked our game,” UAH head coach Mike Corbett said. “That was the best game we played all year. Unfortunately we didn’t get the result that we wanted, but we played well.”

Arizona State (3-2-0) scored with 5:20 left in the first period, six seconds after a power play expired. Tyler Busch found an opening in front of the UAH net, and backhanded the puck over Mark Sinclair for his second goal of the season.

UAH snapped the scoreless drought with a great play right of the bat in the second period. Madison Dunn found a charging Hans Gorowsky at center ice, and Gorowsky broke away to beat ASU goaltender Joey Daccord and tie the game at 1-1 just 30 seconds into the period.

“It all started from a broken play,” Gorowsky said. “I just turned up ice. Madison Dunn made an unbelievable feed between two defenders. I had a full head of speed, took a fake shot and was lucky enough to have some open net to go back in for a goal.”

The Chargers had gone a school-record 254 minutes and 42 seconds without a goal. Their last goal was in the first period of the season opener at Miami on October 6.

“It feels good,” Corbett said. “We didn’t talk about it, we haven’t talked about it, but the boys know it. They’re not dumb. We made a good play. Hans comes down, he gets in alone, and he finishes. We had those opportunities before us, and it’s nice to see him finish as our captain.”

“I definitely think it sparked some energy,” Gorowsky said. “We’ve been working on simplifying our game throughout the week. We just stayed simple, and good things come when you stay simple and play the game honest.”

The Sun Devils regained the lead at 2-1 with 4:18 left in the second. Brett Gruber scored from the doorstep on Sinclair’s right.

Part of the reason the Chargers were able to have a shots advantage this time was with solid power play opportunities, even though the Chargers couldn’t convert (0-for-4). Turning those chances into goals will be a key to victory down the road.

The Chargers feel they can build on today’s performance and get back into the win column Saturday for the rematch at the Von Braun Center. Puck drop is at 7:07 p.m.

“There was a lot of good,” Gorowsky said. “We need to fix a few little things, a few little mistakes, but we’re take the good, build off of it and bring a stronger game tomorrow.”

“Our backs are against the wall,” Corbett said. “We gotta get a win. We want to get a non-conference win for the WCHA. That’s big for us. We need to get a win to boost our confidence. I told the boys they’ve got to believe. We just played simple today, and if we can continue to play this way we can grow from here, because our habits are good.”