It’s been a while since we checked in on our recruits, so at the halfway point of the junior hockey season, here’s where they’re at: 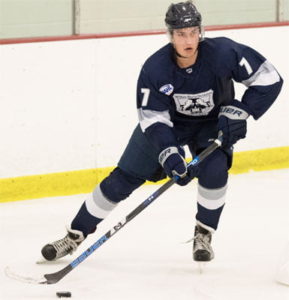 Adrian Danchenko, forward, 6’2, 195, 1999, Palm City, Fla., Wilkes-Barre/Scranton (NAHL) – A sure-fire bet for the 2019-2020 incoming class having signed his NLI, Danchenko got off to a scorching start for Wilkes-Barre/Scranton after barely missing the cut in Dubuque (USHL) with three goals, six assists, and nine points in his first six games. He’s cooled somewhat since, but has still put up a solid 26/7/10/17 slash line to date. Scouts laud the Floridian for his great size, good speed, balance, and nose for the net. His stature will certainly be a welcome addition to a UAH squad that’s often quite a bit smaller than the opposition. With legitimate potential still left to be unlocked, the junior hockey vet could develop into a true power forward at the Division I level. 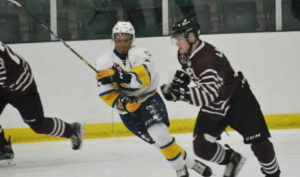 Peyton Francis, forward, 5’11, 160, 1999, Oakville, Ont., Carleton Place (CCHL) – The long-time Charger commit is having another solid season with Carleton Place in the CCHL. A quick, speedy center with good offensive instincts, Francis continues to put pucks in the back of the net even as the quality of play in the CCHL continues to rise. Plotting 14 goals, nine assists, and 23 points in 35 games, he’ll look to build on his solid first half and help his team maintain its first-place divisional standing. Francis frequently wins races to pucks and beats defenders wide on the rush, so the goals and points should continue to come. I expect him to play at a point-per-game pace down the stretch.

Aidan Flynn, forward, 5’11, 150, 2002, Sping Hill, Tenn., TPH Thunder (U16 AAA) – The youngest Charger commit is a versatile, two-way forward who’s continuing to impress and grow as a hockey player. Scouts love his makeup, hockey sense, and elite acceleration. Neutral Zone had this to say about him recently: “He is very sound in all facets of the game. Always in position, always making the right decision, providing support, chipping in offense, killing penalties. He is a ‘glue’ kind of player and can do it all. Really like his skill level as well as his intelligence and overall demeanor.” With these kinds of rave reviews, he’ll be one to follow in the coming years as he charts his path to Huntsville through junior hockey. 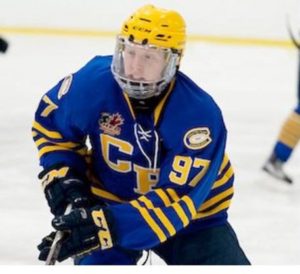 Ryland Mosley, forward, 5’10, 185, 2000, Arnprior, Ont., Carleton Place (CCHL) – A teammate of fellow commits Peyton Francis and Ayo Adeniye, Ryland Mosley’s game remains on an upward trajectory. After scoring over 100 points in 70-plus games in the CCHL2 last year, Mosley had a relatively slow start to the season, but has since been on an absolute tear with 26 points in his last 22 games. He’s cemented himself on Carleton Place’s top line and recently played for Canada East at the World Junior A Challenge in Alberta. If he keeps this up, it’s possible that the skilled, playmaking winger will be called on to come to UAH a year early. Regardless, it’s clear that Mosley has the mind and skating ability to one day be a top-six forward in college. 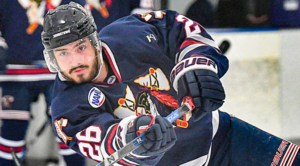 Joey Baez, forward, 5’8, 165, 2000, Tampa, Fla., Lone Star (NAHL) – After starting the season with Johnstown, Baez was traded to Lone Star where he’ll be counted on to contribute offensively for a relatively young NAHL squad. He’s always had above-average speed and puck skills, so I think we’ll begin to see him compile points at a much higher rate than his current 16/4/3/7 totals would suggest. Baez is sure to get more consistent playing time and experience with Lone Star, which bodes well for his anticipated arrival on campus.

Ayo Adeniye, defenseman, 6’4, 190, 1999, Columbus, Ohio, Carleton Place (CCHL) – The sole defenseman currently committed to UAH is really coming into his own in his first year of junior hockey. Maintaining the strong Carleton Place-UAH pipeline, Adeniye is a hulking blueliner with tremendous upside. He’s extremely athletic, moves well for his size, and competes hard. After acclimating to the speed of the junior game, he’s really taken off with eight points in his last 13 games, bringing his year-to-date stats to 37/3/10/13. Most importantly, though, he leads the league in plus/minus for defensemen at a staggering +23, so Adeniye is clearly taking care of his own end and making things happen. With time and top-level coaching, he’s only going to continue to get better. This kid has pro potential on down the line. 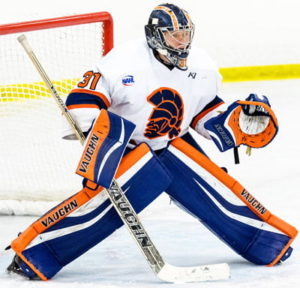 David Fessenden, goaltender, 6’6, 240, 1998, Parker, Colo., Northeast (NAHL) – A massive tender from Colorado, Fessenden has been plying his trade for the Northeast Generals in the NAHL for the past 3 seasons. The Generals have been one of the weaker teams in the league during that timespan, so Fessenden typically sees a ton of pucks each game. As a result, his present .902 save percentage and 3.45 goals-against average don’t really tell the whole story. Often having to make a number big saves on a nightly basis to keep his squad in it, Fessenden has developed an aggressive style in net. Using his imposing frame, he’s regularly at the top of his crease for shots, which helps him sustain solid rebound control. He’ll have to hone his aggression at the next level, but given his size, strong character, and positioning, he could very well be playing pro hockey at some point in the future.

Outside of Fessenden and Danchenko, it’s difficult to say who will all be a part of the incoming 2019-2020 freshman class. With everyone else having at least one more year of junior eligibility, it’ll depend on how each player develops and the number of new commitments the coaching staff is able to reel in. Losing at least three defensemen and four forwards to graduation suggest that we’ll see several guys commit before long. Stay tuned.