Lake Superior State pulled away in the second period to defeat UAH 6-1 on Friday night in Game 1 of the WCHA quarterfinals series in Sault Ste. Marie, Mich.

The Lakers (16-6-3) struck first at the 3:14 on a goal by Pete Veillette, who is too dangerous to be left alone. Veillette was unmarked as he took a pass from behind the net in front and quickly beat David Fessenden for his 12th goal of the season.

Lake Superior took a 2-0 lead eight minutes later on a power-play goal. Fessenden never saw the puck as it slipped between him and the post after flying through a screen off the stick of Brandon Puricelli in the right circle.

After a penalties on the Lakers at the end of the first period and 24 seconds into the second, UAH had a prime opportunity to come back. But despite having over a minute and a half of two-man advantage and scoring a goal, the Chargers found themselves no closer.

Lucas Bahn, dragging the puck to make a Laker defenseman commit, snapped the puck past Mitens for his second goal of the season to cut LSSU’s lead to 2-1.

The Lakers regained their two-goal lead with a short-handed goal just six seconds later. Veillette stole the puck in the UAH zone and quickly scored his second goal of the game.

LSSU then scored three goals in a span of 4:50 to pull away, starting with a Lukas Kaelble’s blast from the blue line to make it 4-1.

Fessenden’s night of tough breaks ended with 3:40 left in the second, when Alexandro Ambrosio’s shot, deflected by Jacob Nordqvist, hit his pad, went up in the air, and somehow fell in the net for a 5-1 Laker lead.

Derek Krall came in, and soon allowed a Miroslav Mucha goal that made it 6-1 at the second intermission. There was no scoring in the third period.

The Lakers outshot the Chargers 27-14.

If this was the last meeting between longtime rivals UAH and Bemidji State for a while, it will be hardly memorable, especially for the Chargers.

The Chargers was shut out by the Beavers again Sunday, this time by a 4-0 margin at the Sanford Center. UAH lost 2-0 on Saturday.

The Chargers now turn to the WCHA playoffs. UAH, the seventh seed, will head to second-seeded Lake Superior State for the best-of-3 WCHA quarterfinals starting Friday.

Derek Krall got the start in net for the Chargers for his first action since Feb. 17. He made 25 saves on 29 BSU shots.

The Beavers wore down the Charger defense on a long shift and took an early lead when Alex Ierullo scored through a crowd in front of the UAH net just 2:11 into the contest.

BSU could have had more. They only had nine shots on goal in the first period because the Chargers blocked 12 attempts.

UAH had three power-play attempts in the second period but could not do much with them.

Bemidji State made it 2-0 by tiring out the Chargers again. Brad Belisle scored on a rebound with 6:08 remaining in the second.

The Beavers got two quick goals early in the third period, both on deflections by Alex Adams.

The Chargers, playing with a shorthanded lineup, were shut out 2-0 on Saturday at Bemidji State.

UAH dressed only 10 forwards and 18 players total. No reason has been given for the short roster.

The Chargers (3-15-1 overall, 3-10-0 WCHA) were fine enough defensively, getting 31 saves from goaltender David Fessenden and blocking 22 shots, but managed only 16 shots on BSU netminder Zach Driscoll.

The Chargers generated more scoring chances during the first half of the second period, but could not yet solve Driscoll. The senior netminder, who denied Tyrone Bronte in his breakaway in the first period, made a stop on Frank Vitucci’s rebound opportunity to keep UAH off the board.

Two straight slashing penalties against Brian Scoville put the Beavers back in the offense, and it was again Fessenden’s turn to shine. He made 13 saves in the second period to keep it a one-goal game at intermission.

The Beavers scored their second goal during a delayed penalty on Ayodele Adeniye, as Brendan Harris back-handed a rebound with 6:26 remaining in the third period.

UAH killed that penalty, but the Chargers’ chances dwindled when Adrian Danchenko got a kneeing major and a game misconduct with 3:40 left.

The regular season ends Sunday with the series finale at Bemidji starting at 2 p.m.

The Chargers know where they are going for their WCHA quarterfinal series. UAH, already locked in as the seventh seed, will head to Lake Superior State, which clinched the second seed with a 2-1 win over Ferris State on Saturday. Game 1 of the best-of-3 series is Friday. 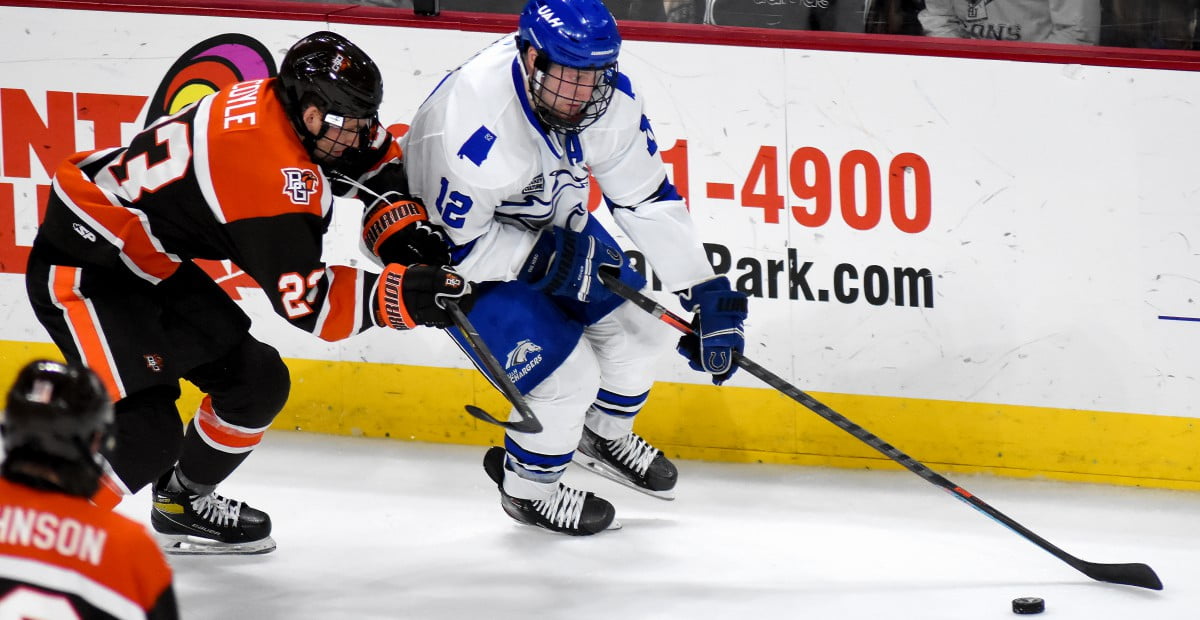 The Chargers (3-14-1, 3-9-0 WCHA) led the 13th-ranked Falcons 2-1 at the second intermission in their season home finale, but could not capitalize on crucial power-play opportunities at the start of the third period.

UAH finishes the regular season next weekend at Bemidji State. The Chargers are locked into the seventh seed in the WCHA playoffs, which begin in two weeks.

Bowling Green (19-8-1, 8-5-1) made its grip on the second seed tighter with the victory, leading Lake Superior State by seven points. If the Falcons hold, they would be hosting UAH in the best-of-3 quarterfinals. Bowling Green has finished its regular season.

The Falcons outshot the Chargers 27-18 and won the possession battle most of the game, but UAH that held the lead twice.

The Chargers got an unlikely goal from an unlikely spot to open the scoring. Defenseman Lucas Bahn took the puck up the right half-wall to just in front of the goal line, threw it toward the net and banked it off Falcon goaltender Zach Rose with 1:26 remaining in the first period.

It was Bahn’s first goal of the season and second of his UAH career, assisted by Connor Merkley, playing for the first time since February 5, and Adrian Danchenko.

UAH gave away the lead almost immediately after starting the second. A turnover lead to a two-on-none breakaway for the Falcons. Tim Theocharidis finally scored after playing catch with Brandon Kruse to tie the game at 1-1 just 35 seconds into the period.

The Chargers got the lead right at 2-1 back with their first short-handed goal of the season. Drew Lennon’s slapshot from the right circle, off a nifty cross-ice pass from Bauer Neudecker, beat Rose for his second goal of the season near the halfway point in the contest.

The Falcons used a short leash on Rose, pulling him for senior Eric Dop, who shut out the Chargers in Bowling Green on Wednesday. Dop continued to stymie UAH, stopping all nine shots he faced.

UAH had a huge chance to increase its lead at the end of the second period and the start of the third. Anton Malmstrom drew a major penalty and a game misconduct with a hit from behind on Connor Wood, and T.J. Lloyd took a roughing minor to give the Chargers a two-man advantage for two minutes.

The Chargers could not capitalize despite getting five shots on Dop over the five minutes of power-play time.

That would bite UAH halfway into the third, when Bowling Green scored two quick goals to take a 3-2 lead. Connor Ford stuck in a rebound in front during a power-play with 10:43 remaining, and Sam Craggs then scored high on the doorstep 54 seconds later.

Ford then added an empty-net goal with 49 seconds remaining for the final 4-2 score.

Before the Chargers’ final home game of the season, UAH honored seniors Merkley and Wood.

Bowling Green scored four second-period goals and never looked back to defeat UAH 5-0 on Wednesday in Ohio in the first game of a home-and-home series.

Game two is Sunday at 3 p.m. at the Von Braun Center, the final home game of the season for the Chargers.

After a scoreless first period, Bowling Green broke the stalemate almost halfway through the second. Connor Ford beat David Fessenden high with a wrister from the right circle.

The Falcons took a 2-0 lead when Max Johnson’s shot up the middle deflected high off a Charger defender and just under the crossbar with 8:25 left in the second. A minute later, Brandon Kruse put BG up 3-0.

Anton Malmstrom made it 4-0 at the second intermission when he scored during an extended delayed penalty on UAH. Ford added a goal late in the third period.

David Fessenden made 36 saves for the Chargers, who were outshot 41-11.