The Chargers’ special teams took center stage Saturday in a 6-3 win over Alaska-Anchorage.

UAH scored a pair of short-handed goals – the team’s first of the season – and a power-play goal in a four-goal second period en route to the win and a sweep of the weekend series.

“This was a shot in the arm for our special teams,” said UAH head coach Mike Corbett. “That’s where the special teams’ play is huge.”

It was UAH’s first series sweep of the season and the first since the 2016-17 season.

Kurt Gosselin and Hans Gorowsky each scored twice to lift the Chargers to 6-11-1 in the WCHA and 6-19-1 overall. Gosselin’s goals lift him to fourth all-time among UAH defensemen in the Division I era with 19.

Gorowsky and Gosselin each scored a short-handed and a power play goal. Gorowsky’s tally was UAH’s first short-handed goal of the season. Cam Knight had a goal and an assist for the Chargers and Jesper Ohrvall also scored. Gosselin had an assist to go with his two goals and Austin Beaulieu added two assists.

“The special teams were working together,” Gosselin said. “We watched the film and we’re able to adapt.”

The Chargers trailed 1-0 and were outshot 13-5 after the first period that more resembled the opening game of a series, instead of the second game.

“It was our typical Friday start,” Corbett said of the Chargers’ sluggish first period. “We’re lucky we weren’t down 3-0.”

Goaltender Mark Sinclair finished the game with 26 saves in posting his fourth win of the season and back-to-back victories this weekend.

It was a rare back-to-back start for the sophomore netminder but Corbett said he was up to the task.

“We felt he played well (Friday) and we needed him to play well (Saturday),” he said.

While they were sluggish in the opening period, the Chargers came out and played a solid second period.

Just three minutes into the period, Knight put a backhand shot past UAA goaltender Kristian Stead to tie the score at 1-1.

But the tie was short-lived as the Seawolves regained the lead just 42 seconds later.

With 5:02 gone in the period and UAH on the power play, Gosselin’s slap shot from the blue line evaded Stead to tie the game at 2-2.

About midway through the period with John Teets in the penalty box for cross-checking, Gorowsky took a breakout pass from Gosselin and put the puck over Stead for a 3-2 lead. It was the Chargers’ first short-handed goal of the season.

Gosselin ran the count to 4-2 with 16 seconds left in the period as he scored on a 2-on-1 break with Andrew Dodson. It was UAH’s second short-handed goal of the game and season.

“We had a good second period,” Corbett said. The Chargers outshot UAA 19-5.

“We knew we started out slow,” said Gosselin. “We figured it out between (the first and second) periods.”

After the Seawolves scored in the third to cut UAH’s lead to 4-3, Gorowsky scored an empty-netter with 1:05 left in the game. Ohrvall scored the finale with just 9.5 seconds to play for the final 6-3 count.

With the win, the Chargers are tied for eighth place in the WCHA with Alaska-Fairbanks, which hosts Bowling Green Saturday night. UAH and the Nanooks (6-10-1) each have 20 points.

The Chargers host Alaska-Fairbanks next Friday and Saturday nights.

“Fairbanks is bigger and stronger (than UAA),” Gosselin said. “We’re a hard-working team … we’ll be ready for them.” 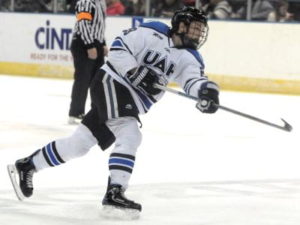